After a disastrous first appearance at the international Grand Prix Final, Japan’s number one figure skater Yuri Katsuki struggles to pick himself back up. Easily susceptible to the pressures of competition, Yuri experiences crippling bouts of anxiety that affect his figure skating, and as time goes on his repeated poor performances in the rink lead him to consider whether he should continue skating. Returning to his hometown to consider his next move, Yuri is shocked when figure skating champion Victor Nikiforov shows up at his family’s onsen, offering to be his coach for the upcoming Grand Prix series. It’s a steep learning curve for both of them, with Yuri competing in a series of competitions to qualify for the final while attempting to face his anxieties, and Viktor learning what it means to be a coach and how to support Yuri, finding inspiration in his new role. With their sights set on victory at the Grand Prix Final, Yuri and Viktor are able to discover what figure skating really means to them, and in turn, discover what they mean to each other. 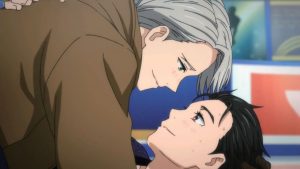 Yuri!!! On Ice was co-created by Sayo Yamamoto (director of the series Michiko & Hatchin and Lupin the Third: The Woman Called Fujiko Mine) and Mitsurou Kubo (perhaps best known for her manga series Moteki and Again!!). The series focuses on Yuri’s career after his disappointing Grand Prix Final appearance, and how with the help of Viktor, he is able to develop a new skating program and compete in the Grand Prix series. Yuri and Viktor are excellent protagonists who complement each other perfectly with their different personalities and genuinely make a great team – inspiring and challenging each other as the series progresses. This is all punctuated by a cast of memorable characters and entertaining skating choreography highlighted by an excellent soundtrack that makes each skate exciting. During its initial run in 2016, it was the only anime series that I habitually tuned in to for each new episode – something I had never done before, or since. What drew me to Yuri!!! On Ice then is much the same thing that continues to engage me about it now – at times a very tongue-in-cheek anime with a dorky sense of humour, it is quintessentially a loving depiction of the world of international figure skating, of the passions and anxieties that both bolster and paralyse people, and a show that puts meaningful, special and loving relationships in all their forms front and centre. 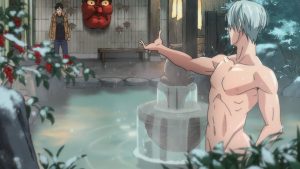 Like all good sports anime, Yuri!!! On Ice is not restricted by the formulaic nature of its main competition – it turns this aspect into a strength. The figure skating competitions throughout the series are made up of multiple skaters competing in two skates – a short program, and a free program. These programs do not change throughout the competitions, which means we see skaters perform the same routines multiple times. In the case of Yuri, whose Grand Prix series theme is ‘love’, we see his short program ‘Eros’ and free program ‘Yuri on Ice’ multiple times throughout the series as he perfects the programs and skates to them in competitions. But while Yuri skates to the same programs, they are never the same routines. The routines warp and change depending on Yuri’s state of mind – sometimes he lands his jumps with precision and other times he doesn’t, his mind consumed by anxieties or thoughts of disappointing Viktor. Other times the routine changes dramatically with his mood – whether he is sad, angry, happy, his emotions translate into the intensity or lack thereof in the routine. This is the same across all performances we see more than once. We are treated to the inner monologues of other competitors, revealing their drastically different approaches to competitions and skating styles, whether it be quickly adapting their routine based on scoring points or insight into the inspiration of their program. It’s all different and it’s all really exciting, seeing something familiar change each time based on multiple factors, amplified by the sound design in the rink of the skates hitting the ice and the backing tracks competitors skate to. It’s undeniably thrilling, and there was never a time I didn’t look forward to a performance. 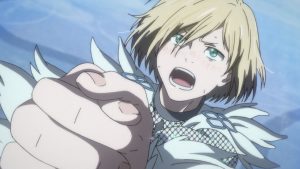 While the figure skating in Yuri!!! On Ice is excellent, it is only as good as the characters performing the routines – and they are all great. Each character, from the energetic Phichit Chulanont from Thailand to Canada’s talented but abrasive Jean-Jacques “JJ” Leroy, are memorable and unique, and each get their time to shine during their skate program and outside it. Even  characters that I wasn’t a big fan of, like the overly passionate and suggestive Christophe Giacometti from Switzerland, had distinct personalities, skating styles and clear motivations. These characters do a lot to round out the world of international figure skating, and are a great ensemble cast that motivate Yuri and Viktor to succeed in the Grand Prix as friends, rivals and fellow competitors. Of particular note in the cast line-up is deuteragonist Yuri Plisetsky, a loud and punk-ish Russian figure skating prodigy competing in the Grand Prix series as part of his senior debut. The two Yuris initially compete for Victor’s help to develop skating programs, both skating to routines about love from different perspectives – Japanese Yuri’s aforementioned ‘Eros’ program on sensual love, and Russian Yuri’s ‘Agape’ on unconditional love. Both skaters take these routines and use them as a short program for the Grand Prix series, and it’s fun watching the two develop their routine and their understanding of their similar but opposing themes as the series progresses, and watching as their rivalry develops as they face each other on the international stage. 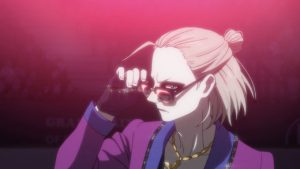 Coming back to Yuri!!! On Ice several years after its initial release was a special experience for me. Towards the end of the series, there is a fun twist that reframes a lot of the interactions in the show, which I really enjoyed experiencing getting to re-watch the show again for the first time. Most importantly, I was reminded of all the things I initially loved about the series; like how great the cast and music is; how it cleverly utilises a formulaic competition using the same performances repeatedly to its advantage to always say something new about the characters and their state of mind; and how awesome it is watching a character challenged by anxiety find the support they need to grow and succeed. There is a drive and honesty to Yuri!!! On Ice that is infectious, be it the light-hearted comedic moments, the passion of the skaters, or the sense of love that pervades the series. This love is present not just in the themes of Yuri Katsuki and Yuri Plisetsky’s short programs, but the sincere love of figure skating by the characters, the support from friends, family and rivals, and the love that grows between Yuri and Viktor as the series progresses. If you missed out on Yuri!!! On Ice during its initial run or just haven’t seen it since 2016, now is your chance to seek it out – it was one of the first anime I genuinely fell in love with and I’m glad to see it still holds up.