Following the defeat of the powerful espers of the 7th Division of the criminal organisation Claw, Mob is tackling his biggest challenge of all – self-improvement. When he’s not working as an assistant to con-man Reigen Arataka at the Spirits and Such Consultation Office, Mob is running for student council president, training with the Body Improvement Club, and preparing for the upcoming school marathon. As Mob gains more confidence and begins to spend more time with his friends, the rift between himself and Reigen grows, and Reigen’s facade as a great psychic becomes harder and harder to maintain. All the while, powerful and dangerous espers begin to reveal themselves, and the leader of Claw and those that serve him are still determined to achieve world domination. 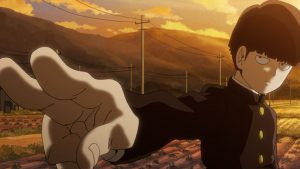 Mob Psycho 100 II is the follow-up to the excellent first season of Studio Bones’ Mob Psycho 100 (see my review of the first season of Mob Psycho 100). After a spectacular defeat of the Claw’s 7th Division in the first season, the second season wastes no time in reminding its audience of Mob’s incredible esper abilities, with the first episode launching straight into a showdown between Mob and a powerful spirit. The episode then quickly refocuses on Mob’s personal life, following his ventures into improving his self-confidence and hanging out with his new girlfriend, Emi. The first episode of Mob Psycho 100 II acts as a great re-introduction to the series, contrasting Mob’s awesome psychic powers with his personal awkwardness and endearing desire for self-improvement. This is the running theme of the second season, interspersed with some fun (and at times shocking) twists and turns along the way as the narrative progresses, the drama unfolds, and the big bads come out to play.

Mob Psycho 100 II has that special quality of a lot of good sequels where it just feels good coming back to the story and its characters again. I never get tired of Mob’s earnest naivety and his struggle to keep his emotions in check to avoid unleashing his powers, or Reigen’s empathetic charm mixed with his scam artist talents. Although on the surface these characters are similar to their first season incarnations – Mob is still insanely powerful, Reigen is continuing to use Mob’s abilities to promote his business, and the spirit Dimple still desires to make himself stronger by possessing Mob – so much has changed in a way that makes them feel both new and familiar. Mob has grown a lot and while he still struggles with aspects of his powers and the danger he could present, his confidence has increased as he’s become more social, causing him to question what he really wants out of life. Reigen’s lies become harder to maintain as the second season progresses, and the desire between wanting to use Mob’s powers for personal gain and wanting to help him as a friend start to conflict. Similarly, Dimple talks a big game about wanting to possess Mob, but has become one of his closest allies. Having already laid the ground work in the first season, Mob Psycho 100 II  has the fun job of exploring these characters beyond their initial framing and has some really good, strong arcs that build on and challenge what has already been established for these characters, keeping the season feeling fresh and exciting. 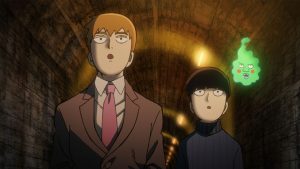 Like ONE’s One-Punch Man, Mob Psycho 100 has mastered the art of crafting its own world and sense of reality. It captures the mundanity and quirkiness of everyday life, but with the application of zany, and often extremely dangerous, psychic elements that make for fun viewing and engaging story arcs. This remains a recognisable aspect of Mob Psycho 100 II, whose often outlandish visuals and intense and fantastical fights take on an otherworldly atmosphere (courtesy of Studio Bones’ experimental and exquisite animation) while managing to still make Mob and his friends feel like genuine people, despite their quirks an insane powers. This mundanity is also really effective in Mob Psycho 100 as having a foot in reality means that the show can very easily establish threatening and engaging villains. Following the first season, it would have been easy to maintain Mob’s unbeatable psychic prowess and use the One-Punch Man method of escalating situations until Mob can arrive to clean up the mess. But ONE and Studio Bones are able to avoid this in part by introducing characters like Keiji Mogami. While the first episode of Mob Psycho 100 II reaffirms Mob’s exceptional powers, this is followed by the appearance of Mogami, a great psychic turned evil spirit, that can not only hold his own against Mob, but could absolutely destroy him. Mogami is introduced as a spirit possessing the daughter of a rich businessman, in a series of events that immediately establishes him as a threat by showing how carelessly he treats his mortal host body and how much he enjoys manipulating those around him. Mogami’s arrival in the narrative is exciting as he presents a genuine threat to Mob and his allies, upping the stakes in a supernatural narrative where mundane elements make the conflicts feel more visceral and gut-wrenching, while also acting as a great character foil to Mob’s own emotionally repressed state. 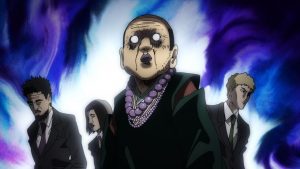 Mob Psycho 100 II is a strong sequel that improves upon its first season in every way, packed with all the psychic action, drama and terrifyingly powerful villains you could ask for from a shonen series. The season takes what has already been established about the Mob Psycho 100 characters and the world they live in and comes up with new ways to explore them, all the while delivering visual spectacle and a concise overarching narrative. If you haven’t checked out the series already, catch up on the first season and then get your hands on a copy of Mob Psycho 100 II – it’s definitely not one to miss out on.