Shigeo Kageyama, nicknamed Mob, is a high schooler with immense psychic powers. To keep his powers in check, Mob works as an assistant for con man and self-proclaimed psychic master Reigen Arataka, performing odd jobs for a variety of clientele whose issues range from true hauntings to blemishes on photos that are supposedly evil spirits. When he isn’t working with Reigen, Mob is trying to live a normal life by hanging with his brother Ritsu or improving himself beyond his powers by training with his school’s Body Improvement Club. Unfortunately, weirdness seems drawn to Mob, and supressing the true magnitude of his powers has caused him to supress his emotions. However, when Mob’s emotions surge, the true extent of his powers emerges and threaten to overwhelm not only him, but those around him. 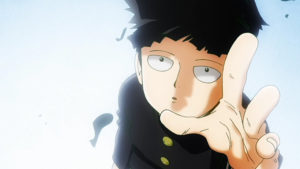 Mob Psycho 100 is the next manga to be adapted into an anime from ONE, creator of One-Punch Man and other assorted manga. It maintains ONE’s style of humour in mundanity, protagonists who appear dull to those around them but are engaging and warm-hearted, and an excellent execution of simple ideas. The show starts off feeling like a collection of slice of life stories, if the person in said slice of life stories had incredible psychic powers hidden under an unassuming exterior. But Mob Psycho 100 quickly reveals itself to be more than that, with actions and their consequences unfolding across the show’s 12 episodes as we learn about Mob, his anxieties and the motivations of those around him. Top that off with a helping of psychic powers and esper battles that exemplify the power and creativity of animation as the show flies between visual styles to illustrate raw and unpredictable psychic energy, and you have something really special. 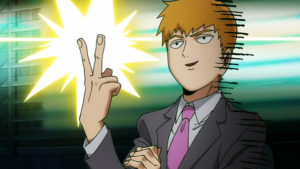 Characters in Mob Psycho 100 are contradictory, wacky, and compelling. Reigen is an excellent example of this, he’s supposed to be a lowly con man, but the contradiction is that he genuinely cares about Mob and gives him some really meaningful advice while still remaining a grifter whose talents get him out of (and sometimes into) sticky situations. The titular character Mob is also someone built on contradictions that make a compelling whole. He is the very juxtaposition of mundane and extreme, a high schooler who is considered to be fairly ordinary but is in actuality a powerful esper who isn’t particularly proud of his abilities and would rather improve his physique training with the Body Improvement Club than use his powers for any sort of personal gain. Mob’s fear of his powers also plays a large role in the series, and the loss of control when he goes 100% causes him genuine despair. But Mob Psycho 100 frames this fear and despair sympathetically and intelligently. Insane power levels and loss of control are staples in Shonen narratives, but what sets Mob Psycho 100 apart in this regard is its willingness to not only examine these tropes but actually challenge them. Rather than having Mob overcome his fear of his powers by outright embracing them in battle where he is forced to protect his loved ones, the show acknowledges that Mob is just a kid. It acknowledges that he’s young, scared and vulnerable, and shouldn’t be forced to do something that is quite traumatic for him. Most importantly, Mob Psycho 100 doesn’t just make this assertion, it substantiates it. Given the excellent battle sequences within the show, this sometimes feels like a ‘have your cake and eat it too’ scenario, but I appreciate that Mob Psycho 100 was able to not only use a well-worn trope but improve upon it. 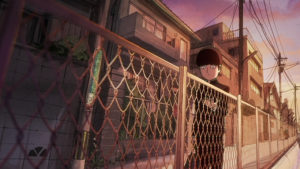 There is passion in every second of footage in Mob Psycho 100. From the esper fight sequences, the visualisation of Mob’s immense power through different artistic styles, and the visual change during particularly humorous moments in the show, the animation flows and changes depending on what the narrative requires. The editing during battles is particular good, with long, unedited shots of Mob unleashing his powers in flashes of colour that fluctuate between artistic styles and scenes that go from nail-biting and chaotic to light-hearted and even comedic as events unfold. Don’t let the supposedly simple design of the characters fool you, there’s a lot of depth and enjoyment to be found in Mob Psycho 100‘s design and animation. 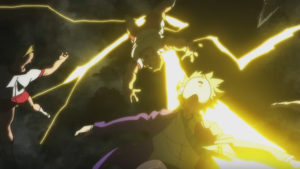 Mob Psycho 100 is an excellent show, and I feel as if I’ve barely scratched the surface of the first season in this review. It sounds laughable given the twelve-episode length of the show, but it’s the truth. I was instantly invested in Mob Psycho 100 and would encourage anyone who appreciates a tight narrative that isn’t afraid to examine well-worn tropes or animation that has passion oozing out of every frame to hunt down a copy.