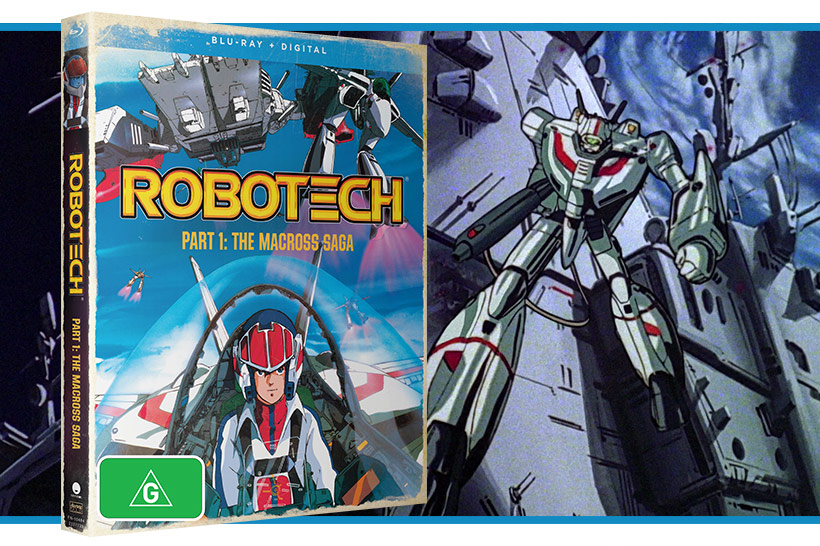 Robotech is arguably one of the core foundations from which Western anime fandom was built upon, with this first of three compilations locking in the entirety of its first arc, the Macross Saga.

Set in the far-flung future date of 2009 and 10 years after a mysterious alien spacecraft landed on earth triggering a third world war in 1999, Robotech Part 1: The Macross Saga focuses on the adventures of small town boy Rick Hunter who invariably finds himself joining the rest of humanity as they defend Earth from the invading Zentraedi. Through the piloting of Vertitech fighter jets, transforming fighter aircraft built from the technology uncovered through the restoration of the SDF-1, Rick and other hotshot pilots venture into space to defeat their enemy and reclaim their peaceful independence through the power of love, explosions and pop songs. 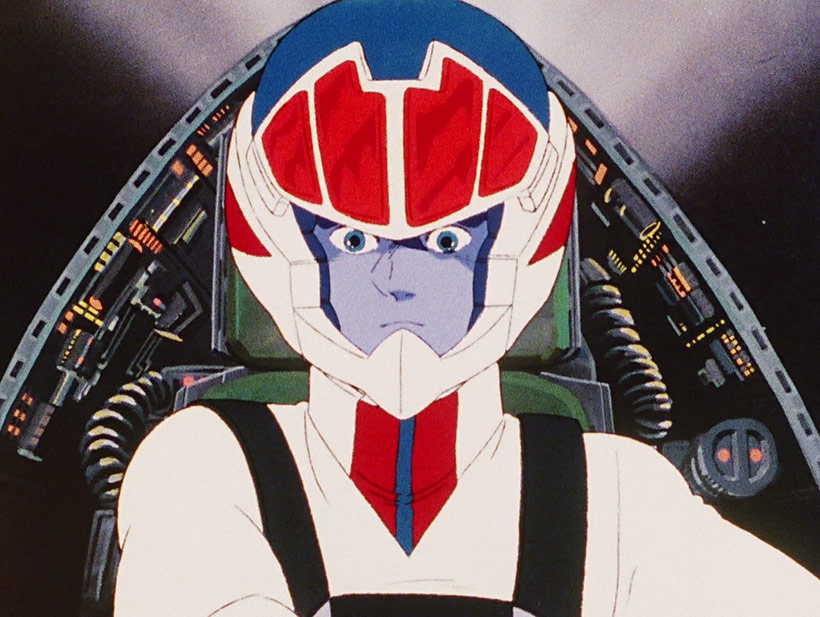 I’m still in something of a state of shock that Robotech has received a native Blu-Ray in Australia. Native as in a genuine HD release, as this set was generated from a fresh scan of the 16mm, 2nd generation film masters that were in turn telecined for broadcast (and previously DVD) release.

And released as in… how did this get released?

Robotech has evolved from a miracle of circumstances to something of a source of controversy amongst anime fans. Originally three distinct series’, Robotech as we know it mashes together the legendary Super Dimensional Fortress (SDF) Macross with Southern Cross and Genesis Climber Mospaeda to create a sprawling, inter-generational saga thanks to the power of localisation. Arguably a tool of necessity to adhere to the typical rules of US television syndication which prefers a minimum 65-episode run to neatly fit into the rigours of TV programming at the time, the outcome has resulted in some problematic hubris for licensor Harmony Gold.

The pioneering venture created a critical doorway to bring anime to the west, and along with Astro Boy, became a foundational element of the Australian anime experience.

But unlike it’s fellow mecha-piloting juggernaut, Gundam, Harmony Gold has earned a reputation for its highly protectionist, revisionist and litigious handling of Robotech’s IP which has severely crippled the broader Macross universe from achieving a mass market contemporary space. This is because Harmony Gold sees Robotech as creatively distinct from its source material (SDF Macross, Southern Cross and Genesis Climber Mospedia), but considers the characters, mecha designs and space opera premises, common to both the source materials and Robotech, as their IP as well. Muddying the waters is that Tatsunoko Pro, who licensed Macross to Harmony Gold, didn’t own the full rights to SDF Macross (Bigwest has that honour), and it was the team at Studio Nue who produced the animation with funding from Bigwest itself.

This means anything from the Macross universe (which now spans 40 years of anime, manga, toys and statues), in addition to presumably anything from Southern Cross or Genesis Climber Mospedia, cannot be sold in the West unless an agreement has been put in place despite plenty of banter over the years disputing this, albeit with very limited success.

So it was with a great deal of surprise that Harmony Gold finally reached an agreement with Bigwest last year, and that we’ve begun seeing the fruits of this labour trickle through in the form of this Blu-Ray release of Robotech Part 1: The Macross Saga.

At least that’s my assumption – Harmony Gold, Bigwest, Tatsunoko Pro, Studio Nue and all the other parties in the mix aren’t terribly forthcoming with anything beyond the press releases.

It’s an interesting thing to explore in 2022 though – Robotech Part 1: The Macross Saga in many ways set down the template for localisation back in the 80s, and the practices would echo for nearly 20 years. Dialogue was often heavily rewritten, speech patterns would sound a little odd as they raced to sync up with the mouth animation and the original ops/eds were chopped up with new original music added.

But in other ways, it was also more ambitious and innovative compared to what followed. The cuts aren’t as heavy handed as, say, Sailor Moon, and the original music, including the opening track, fit well with the look and feel of the show. They retained elements that would have otherwise been removed, such as inter-racial relationships, love and marriage, tensions between the humans and the Zentraedi based on race, creating fresh dubs of the vocal tracks and retaining the deaths of critical characters all while maintaining a continuous, serialised narrative.

There’s a sense of earnestness to the production, and that energy is what gives this show such a strength. It also helps that SDF Macross, which is what this arc generally follows with tweaks to suit the freshly-created universe, is a classic anime to begin with. The characters are interesting and exhibit growth, the crazy idea that pop culture was the power to win wars is a fantastic ride in practice and the animation. 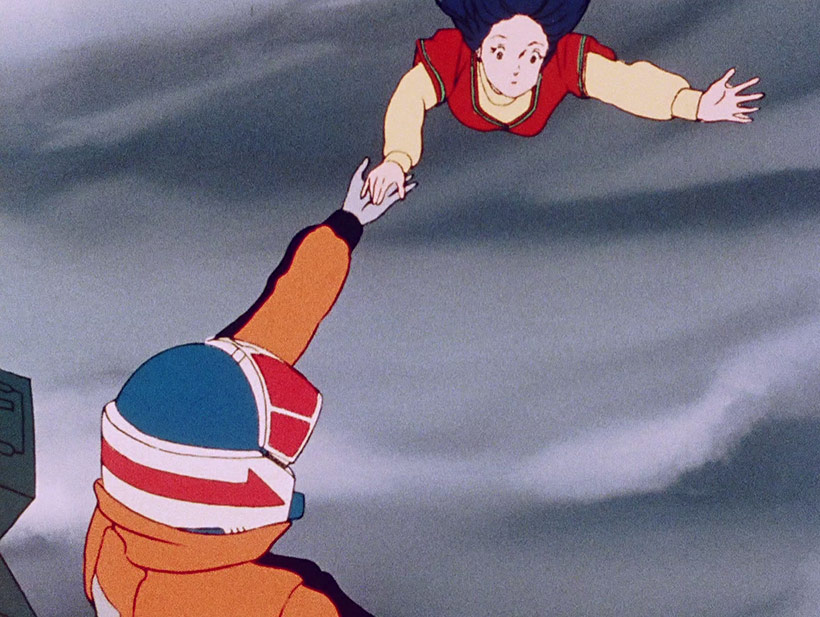 Despite the constraints inherent in anime destined for television broadcast, the sheer ambition and gorgeous hand-drawn animation is at times breathtaking. Those used to more contemporary productions may find the rough edges somewhat offputting, but if you can’t find the beauty in those iconic transformation sequence and waves of missiles you’re doing it wrong. Studio Nue leveraged the now-legendary Shoji Kawamori’s strength for amazing mecha designs and transformations to such tremendous effect that they arguably become a central influence to the amazing mechanical animation sequences in OVAs, movies and TV shows to come.

This leads in neatly to discussing how Robotech has been restored and presented in this set. As the masters were based off second-generation 16mm film I’m more than happy to give the heavy grain a pass as it’s preferable to a software upscaled effort on standard definition telecines.

But the new intro sequences with the modern image asset and credit overlays? I’m hardly thrilled as it contrasts so poorly against the organic qualities of the animation and the zoom/fade on the text scream of someone getting excited with a non-linear video editor’s titling tools, whereas the original opening was iconic with its use of spliced elements from all three arcs and early-80s video effects.

But the area where the time capsule gets unceremoniously shattered over and over is the lack of an original audio mix. Robotech Part 1: The Macross Saga has inherited the same 5.1 mix found on the previous DVD releases where the team decided to overlay new sound effects and aggressively target a dynamic surround mix. This means the classic mecha foley gets overlaid with more pedestrian effects and the battle sequences aim for a hyperbolic theatrical blockbuster feel with modern sci-fi/action effects that overpower the dialogue and music. 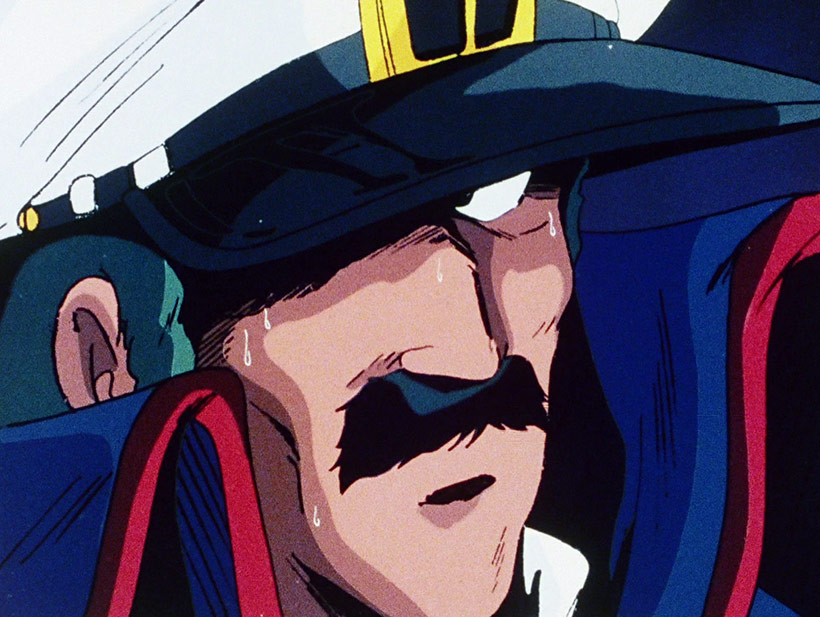 While I can appreciate it was an enthusiasm for the source material that lead to this experiment and they’re probably rather chuffed with their efforts, I don’t understand why we can’t have the original mix as an option. While the dialogue is thankfully untouched and sounds fantastic, the “creative tinkering” with the audio mix smacks of the kind of overreach and retconning that make Star Wars fans lose their collective minds over the Special Editions.

It’s a real pity, but it’s possibly something incredibly subjective. For me it just sounds “off” against the dialogue, music and remaining audio effects which perfectly match the animation style, then suddenly we get a Michael Bay-style woosh/bang/explosion and I’m adjusting the volume as the mix favours the booms instead of the former.

Fanboy whinging aside, there’s little to complain about with the rest of the package. For Robotech Part 1: The Macross Saga we get an exhaustive selection of extras, all seemingly taken from the original DVD release judging by the MPEG2 encoding flag when I was watching it on my Sony UDP-X800. These include the Japanese ops and eds for SDF Macross, Southern Cross and Genesis Climber Mospeda, the original Robotech op, alternate endings, concept art, promotional videos designed to be pitched to local television networks, toy advertisements, and much more.

For the encoding side of things, the video’s grainy but the bitrate allocated helps preserve detail without suffering from excessive macroblocking (or worse – applying too much digital noise reduction to ease the bitrate which results in a smeared mess). The screen captures in this review probably highlight the grain a bit hard, and compared to the Japanese Blu-Ray release of SDF Macross (which has been gorgeously restored) it doesn’t look quite as shiny, but I’m happy with the decision they made to allow the grain to hang out in order to retain the detail. Audio is technically in good order – dialogue and music sound absolutely brilliant, but the overdubbed foley and modern sci-fi action kabooms are out of balance (and subjectively unwelcome).

Robotech Part 1: The Macross Saga has been fantastic to experience in Blu-Ray – the native HD rescan has come out well, the extras are exhaustive but the audio is unfortunately problematic. If they kept the option to roll the original audio mix this would be blazing along with 5 stars, but as it stands this is still a fantastic example of classic anime that all fans should check out.