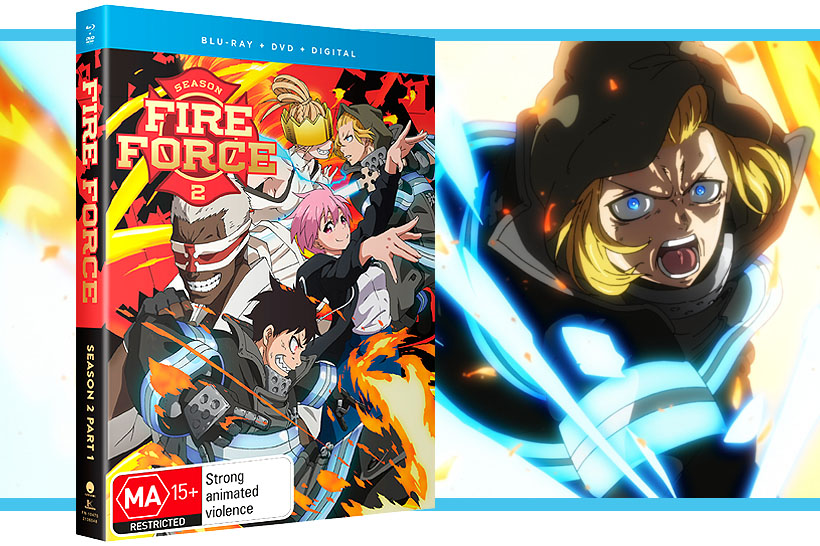 Following Special Fire Force Company 8’s attack on the White-Clad cultists, Shinra Kusakabe is more determined than ever to stop the cultists’ plans, figure out a way to cure infernals, and put an end to the condition of Spontaneous Human Combustion. But as a pyrokinetic in possession of an Adolla Burst, Shinra’s connection to others who possess similar powers begins to grow and change, resulting in unforeseen consequences. In Company 8’s search for answers, Shinra and his colleagues travel beyond the Tokyo Empire with other Fire Force Company members to research the Great Cataclysm, seeking to uncover more information on the Adolla Bursts and the motives of the White-Clads as they hunt down those who possess this mysterious power. 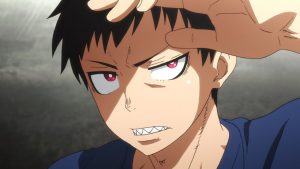 Following my viewing of Fire Force Season 1 (check out my reviews of Fire Force Season 1 Part 1 and Part 2), my assessment of the series was an anime made up of fun moments of flash and spectacle that was ultimately held back by poor pacing and lacking characterisation of its core cast. Although I was interested to see where the series would go after the season one finale, it was without great expectations that I began my viewing of Fire Force – Season 2 Part 1. Fortunately, be it because the narrative finally has room to explore the more interesting aspects of its premise following 24 episodes of stagnant build-up or because it’s season two and I’ve simply given up being annoyed about characterisations and am just rolling with it, Fire Force – Season 2 Part 1 has a little bit more to offer this time around with some interesting new characters, genuine laugh out loud moments, and a promising sense of the narrative coming together .

Fire Force – Season 2 Part 1 essentially comprises of two focal points – the introduction of school student Inca Kasugatani and the journey of Fire Force Company members to the Chinese Peninsula to research the Great Cataclysm, an event which saw flames devouring a majority of the planet. Both events link to the mystery of the Adolla Bursts and those who possess their power, and neatly tie into the broader narrative of Fire Force in a satisfying way where the previous season often struggled to do so. Interesting concepts also come closer to the forefront as the series delves deeper into the Adolla Bursts and the links they cause between characters, with the first pillar (the first pyrokinetic to possess an Adolla Burst) taking advantage of her link with Shinra and stoking his bloodlust to force him to attack others. The scene itself is fun and makes up a solid episode that introduces new concepts, characters and actual characterisation and moments of introspection for several of Fire Force‘s characters. Overall, it was a genuinely pleasant surprise in a series that in the past has deescalated or circumvented the interesting situations it created. This incident is the spark for a series of events that gives Fire Force a better sense of focus, as other pillars awaken and Shinra’s connection with them and what it means is examined, the white clads begin their hunt in earnest, and the characters’ discoveries lead them to the Chinese Peninsula – it’s a concrete sense of direction and purpose, one that the series has thus far been missing and is sorely welcome. 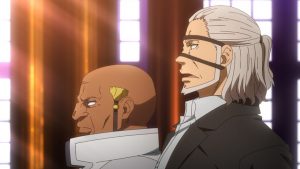 As mentioned previously, there were some genuine laugh out loud moments in Fire Force – Season 2 Part 1. Although these moments were relegated to the first few episodes for the most part (although the nude calendar segment in the first episode was worth the price of admission alone), it was a positive change of pace and a good attempt to balance the often overly dramatic leanings of the series with some humour to personalise the characters. Additionally, to give credit where credit is due, Fire Force continues to be creative in interesting ways despite sticking firmly to a fairly basic Shonen premise. The creativity of the pyrokinetic abilities continues to be an entertaining and honestly fascinating aspect of the series. If you like the variety of quirks in My Hero Academia and the new and interesting ways they represent common power-based tropes, then Fire Force will provide similar entertainment. The restrictions of rooting all of the characters’ powers in pyrokinesis provides a limitation that makes the concept much more creative, and it’s always interesting to see new powers revealed even if the characters who have those powers may lack the same alure at times. Among the list of new and interesting abilities introduced in Fire Force – Season 2 Part 1 is Special Fire Force Company 4 Pan’s status buff ability which gives others increased heat resistance, and student Inca who can predict the pathway of flames via its scent. These abilities are fun, and this creativity props the series up in its duller moments when it is filling the space between important plot beats. 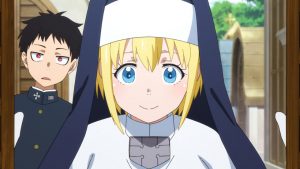 I have continuously found the characterisation and attempts to present Special Fire Force Company 8 as a found family in the Fire Force series rather lacking – not enough groundwork, and too much inconsistency in the characters and their relationships with each other for my preference. But shedding my hang ups with that aspect of Fire Force and enjoying the humour and creativity in Fire Force – Season 2 Part 1, as well as the welcome focus on an overarching narrative that feels like it is finally settling into place, does make for an overall good Shonen experience. Here’s hoping the next half of season two can keep things moving in the right direction.