In a world where spontaneous human combustion causes people to be transformed into dangerous Infernals, third generation pyrokinetic Shinra Kusakabe joins special Fire Force Company 8 to protect the populace and become a hero. Able to ignite and control fire from his feet, Shinra uses his “Devil’s Footprints” ability to work alongside his new team and investigate the cause of spontaneous human combustion and what exactly is behind the creation of Infernals. But as Company 8 delves deeper into their investigation, they realise that they might not be able to trust the other Fire Force Companies, and Shinra discovers that there may be more to the fire that consumed his mother and younger brother all those years ago. 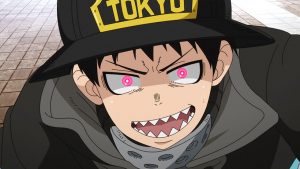 Fire Force is a flashy, action-packed anime based on the manga of the same name created by Atsushi Okubo, best known for his series Soul Eater. Fire Force Season 1 Part 1 contains the first 12 episodes of season one, following Shinra as he adjusts to life at Fire Force Company 8, the eclectic cast that make up both his company and the other Fire Force Companies, and learns what it means to be a fire soldier in a special fire brigade. For a series that focuses on a fire brigade, the action scenes are appropriately jam-packed with some seriously searing visuals and action sequences as Shinra and the gang take on Infernals and those that may be connected to their creation. The visuals on the flames are really visceral, and you can almost feel the heat rippling off the screen as the sound design and visuals work in tandem to deliver some really stunning sequences. In contrast, Fire Force Season 1 Part 1 also has some quieter, more thoughtful moments that stand out as well. A particularly interesting episode features Shinra and new Fire Force Company 8 recruit Arthur Boyle butting heads as the rookies of the group, competing with each other as they are keen to head into the field and begin eliminating Infernals. But this competitive behaviour is brought into question when their Captain reminds them that taking down Infernals is a sombre affair, and how it is important to acknowledge that before they were fiery monsters, Infernals were just humans. The exciting action sequences and glimpses of something a little more thoughtful make up the best aspects of Fire Force, and on the surface, make for the beginnings of a solid shonen series. 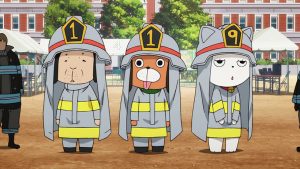 But flash and panache alone do not a good shonen series make. Fire Force Season 1 Part 1 starts off well enough, but pacing issues and lack of satisfying character exploration quickly make the show feel tedious. Early on there is some effort to try and make Fire Force Company 8 the underdogs and outcasts compared to the other companies, but there is very limited screen time devoted to anyone other than Shinra. This is a shame because the core characters are solid; company Captain Obi, the team’s powerhouse Maki, medic and nun of the Holy Sol Temple Iris, and the cocky and delusional knight Arthur, to name just a few. I wanted to love these characters, and the foundations for a great cast of characters were there, but by the end of the 12 episodes I felt like I still knew very little about them and found it hard to really enjoy Fire Force as a result. The character of Tamaki, fire soldier from Fire Force Company 1, was also detrimental to my enjoyment of the show as she is basically Fire Force‘s version of Mikan from Danganronpa – she continuously finds herself in compromising situations or scenarios where her clothes fall off for no reason. Since this is basically her defining trait, she contributes very little to the show aside from pandering, and the ‘joke’ of her finding herself in these situations quickly becomes boring and tiresome, adding to my overall disengagement in the show.

While watching the series I found myself wishing multiple times that the story would lean further into the found family and pack of outcasts aspect of Fire Force Company 8 that the show initially seemed to be going for. A clearer focus on this could have led the show to concentrate more on its core characters and made its grand story about the cause of the Infernals and suspicion of the other fire force companies more engaging and impactful. 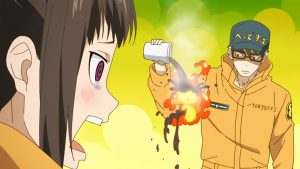 Fire Force Season 1 Part 1 skates by on flash and spectacle, with its really cool action and impressive fire effects coming at the expense of exploring its core cast of characters in any meaningful way. Although somewhat disappointing, Fire Force is still a standard shonen anime that can provide some basic fun and entertainment. I was personally hoping for more from part one of the series, however I’d still be interested to see where the story goes from here and hope it moves past the growing pains evident in this first batch of episodes.