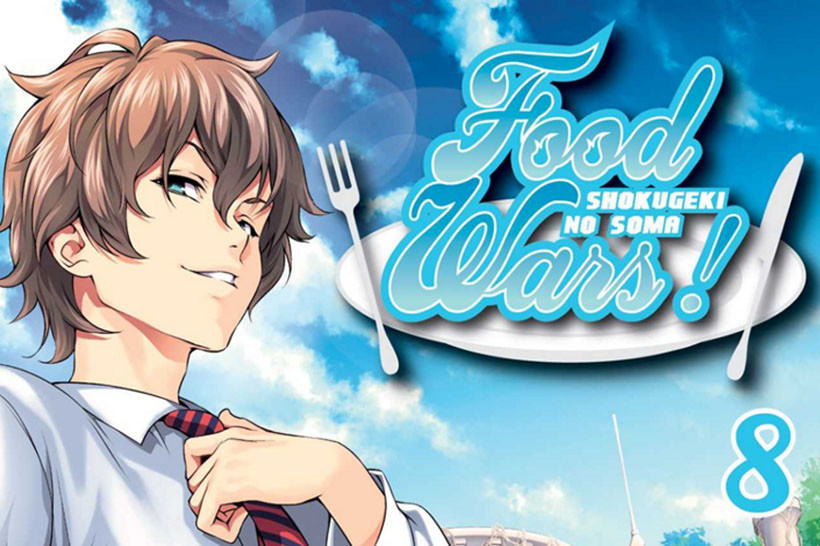 Food Wars! Vol. 08 picks up right where the battle for the Fall Classic Preliminaries left off in volume 7, with Soma and curry master Akira Hayama. This particular battle was highly anticipated, for obvious reasons, and author Tsukuda and illustrator Saeki do not disappoint. Of course, both dishes are incredibly crafted and presented in the manga, but the really interesting part is the judge’s reactions as there is a heated argument over who the ultimate winner between the two is with a verdict that leaves both parties partially satisfied and disappointed at the same time. The difference between the number of judges that like a dish from the actual final score received was a clever way to handle the battle and keep readers guessing up until the final moment. 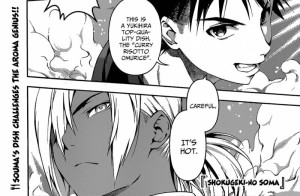 As both contestants move on to the next round of the Fall Classic, another mysterious challenger is briefly shown, before the members of Polaris band together to celebrate, cook, and experiment to keep Soma and Megumi occupied until the next stage of the tournament is announced. Isshiki makes one of his rare appearances as a fully clothed human and takes Megumi and Soma off to a children’s cooking class, before cheerfully abandoning the to the rowdy, difficult children and goes about his own business teaching an adult’s cooking class. Soma and Megumi quickly find a way of capturing the attention of the children to participate in the cooking, with great success. Afterwards, the Polaris trio return to campus and the waiting game begins. While containing some comedic moments and Soma and Megumi’s time teaching kids how do make dumplings develops Megumi’s feelings for Soma, this portion was the least fleshed-out, but nicely gives a bit of a break and a change of pace before the finals. 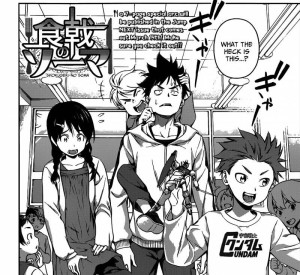 Instead of mailing letters to the lucky few who survived the Fall Classic prelims, the school summons each student one by one to inform them of their first challenge in person. Soma is drawn at random to participate first in the finals with another finalist and the theme is bento. This is where the highlight of the book is, at the beginning of the finals. Although the gap between the start of the finals and the announcement of Alice as Soma’s opponent is only three pages, the narrative builds a good amount of tension within the small space; highly reflective on Tsukuda’s ability to draw in the audience. As is custom, Alice’s background is explored in more detail in order to give the readers insight into the history that led to her dish’s creation, and Soma gets a moment for similar reasons. Both the interesting dishes and presentations between Alice and Soma, as well as the dynamic storytelling utilized amazes me with how a series about making food manages to be so tense at times. 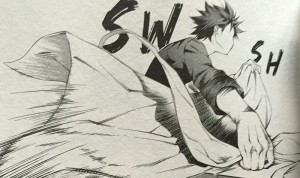 While Food Wars!‘s food and metaphors the characters use to describe their taste sensations are on point as always, the volume ends on a slightly frustrating note, as after Alice and Soma present both their dishes and the judges taste and comment on both of them, the volume comes to a cliff-hanger conclusion before a verdict is decided. It felt like a competition cooking show on TV finishing the episode on the same note. (Those who get riled at cliffhangers because of complete immersion will know what I am on about) Instead of a conclusion, we are given a short story about Erina Nakiri’s summer vacation that had the Nakiri cousins attempting to interact with the riffraff at the public pool that showed Erina’s softer, slightly less tsundere side and offered more time for Alice to troll her. (Something that will never get old)

I really enjoyed this volume despite being left in suspense. (Curse you, cliff-hanger endings!) Food Wars! continues to be an excellent and unique read, and although there were minor parts that were not as fleshed out as the rest, the continued advance of the Fall Classic completely makes up for it and is definitely worth reading for the fans of the series. Also, if you are a fan of the recent anime adaption, this volume contains both the conclusion of the anime as well as what happens beyond, so if you are as enthralled by the story as I am, it is definitely a must-read.