First off, I will admit that I watched the show first before delving into the source material. I thoroughly enjoy the show for what it offers, and wanted to see if it held up to the manga, or simply took the premise and ran something completely different. Happy to see that the anime stayed truthful to this story, as it’s addictivly fun to watch (and now read).

The manga started being serialized around the end of 2012, with positive reception. Taking what is highly viewed at the moment: cooking shows, and battle shounen, you’re given the feeling of reading Naruto or One Piece, if they were locked in a classy culinary school and fought in an arena similar to Iron Chef.

The premise is a very run of the mill affair with battle shounen’s: boy on a journey must face off against varying opponents whom either become a constant nemesis, or begrudging friends, with the usual opponent turned love interest.

This volume holds two chapters, the original one shot of Food Wars! and a little side story.

We’re introduced to Sōma Yukihira, an aspiring chef in his father’s family restaurant, about to enter high school. Fully focused on his dreams of becoming a chef that can beat his father in terms of skill. They have a healthy rivalry when it comes to cook offs. The two have similar personality traits, liking to taunt the other’s skill, and a bizarre tendency to create disgusting meals with completely wrong combinations of food.

Without warming, his father closes the shop and ships our main character off to a culinary school. What he does not know is that it’s a school famous across the world for creating the best chefs.

Here, at this new school, he comes to realise that nearly everyone else has come from well established restaurants, and companies in the food industry.  At this time we’re also introduced to Erina Nakiri, the granddaughter to the dean of the school, daughter of a prestigious high school food chain industry, and feared by many for her ‘God’s Tongue.’ An ability to accurately describe all the ingredients and how they taste.  She is the first person Sōma encounters, and she just happens to be the judge tasked with accepting new applicants. 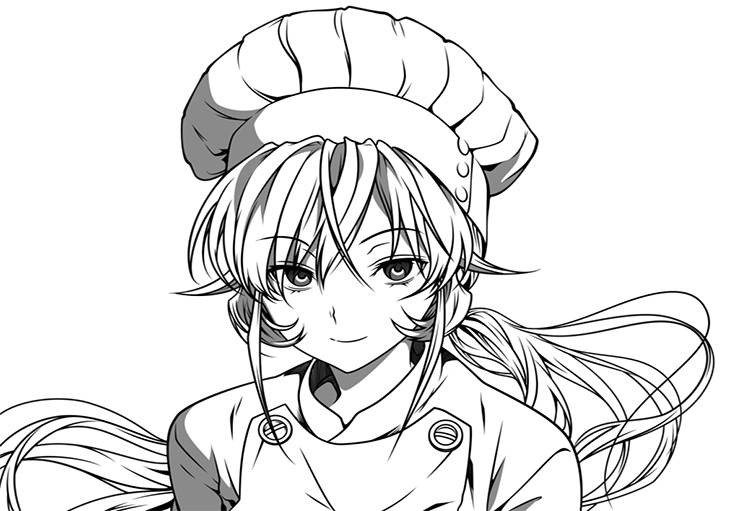 This meeting is the first encounter of the battle shouenen aspect of the manga. Donning his bandanna, Sōma transforms into fighter… who cooks. The meal comes across as spectacular, yet it being such a basic style of food, Erina lies and rejects the meal, effectively disallowing him entry into the school.

At the start of the new year, we find Sōma back at the school, this time accepted, with a small panel showing us a mysterious old man eating his meal and smirking. He is labeled a nothing and trouble maker after a rather fiery speech, challenging any student that wishes to face him. 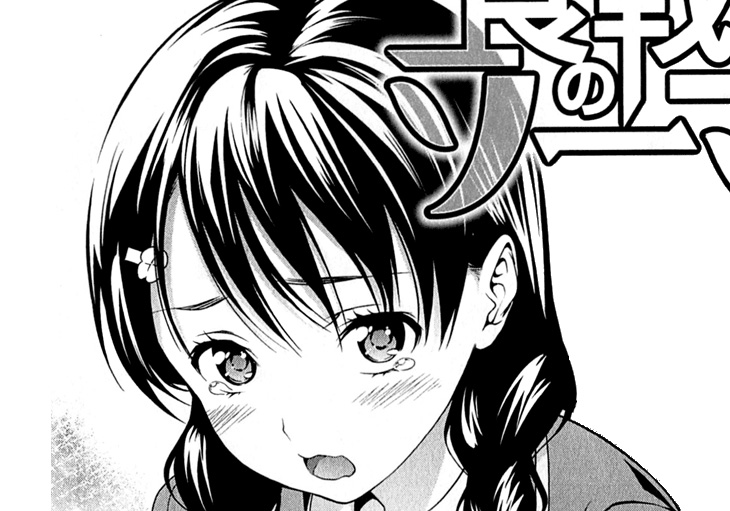 The next chapter sees us introduced to Megumi Tadokoro, a fumble student that wishes to become a chef so she can return home and help her mother run an inn. A timid, fearful character, she is on the precipice of expulsion, given her low grades. She makes a promise, giving her all to getting her grades up and staying in this school.

Sadly, her promise to herself seems dashed, as she’s teamed up with Sōma (whom everyone now hates), and an instructor that gives then a cooking challenge, with either a pass of fail grade. On top of this mounting pressure, Sōma doesn’t even know what the dish is, and wish other students trying to make him fail, all seems lost for the two of them. Luckily, Sōma pulls through with an ingenious idea, making the ever serious instructor smile for the first time. Megumi is thankful, having survived one more day, and wishing to team up with Sōma once again.

The next part of the manga is the One Shot, the first part of the story written and submitted before serialization. The story is somewhat the same. This time in a culinary school that looks like a typical Japanese high school, with Erina a student and teacher. Sōma bumps into her, and they have a cook off to settle which of the two are better in terms of cooking styles, as Sōma has called her cooking boring, and had never attended any of her classes.

The side story deals with a middle school student that was a classmate and customer of Sōma’s. She is a quiet girl that hardly talked to Sōma, yet was chosen as a food judge when he and his father battled with their food. We learn, after Sōma left for his new school that she had feelings for him, yet could never express it.

Ultimately the writing seems bland and typical, but I will give a lot of credit to where it’s due. I love the characters Yūto Tsukuda created. Even from the start of this manga we’re thrown into the world of each introduced character, and shown the meaning behind their personalities, and it’s done strikingly well. Along with touching moments, and comedy that blends the story into this deliciousness you cannot help but devour.

The art style is… technically perfect. Every character is strikingly different from the next, with even the background characters given personal touches that isn’t a copy/paste from one to the other. There are small identifying markers for all introduced characters, which I suppose is typical of battle shounen, but given the school setting and expanding cast, it’s nice to see that none of the characters look a smidge identical. The foreground and background details vary, depending on the scene, but Shun Saeki keeps a high level of detail all-round; with well drawn battle scenes. The sudden, comedic (and at times eechi) moments are partnered up well with the art style that did draw an outward laugh or two.

There is one other name I have yet to mention, and probably the most important one: Yuki Morisaki. She is a collaborator of the series, handling the recipes, and Mother of God do you want them all. Besides the humor and battles, the food takes the main stage, and ever piece shown is mouth-wateringly tempting. I mentioned the basic dish Sōma made for Erina, well that recipe is actually in the manga, and I will definitely try my hand at it.

At the end of the day, if you enjoy striking characters you will remember, beautifully drawn food, fun cooking battles, but at the expense of solid story writing, Food Wars! is the perfect manga for you. I thoroughly enjoy this series, as it’s just fun, with memorable characters.