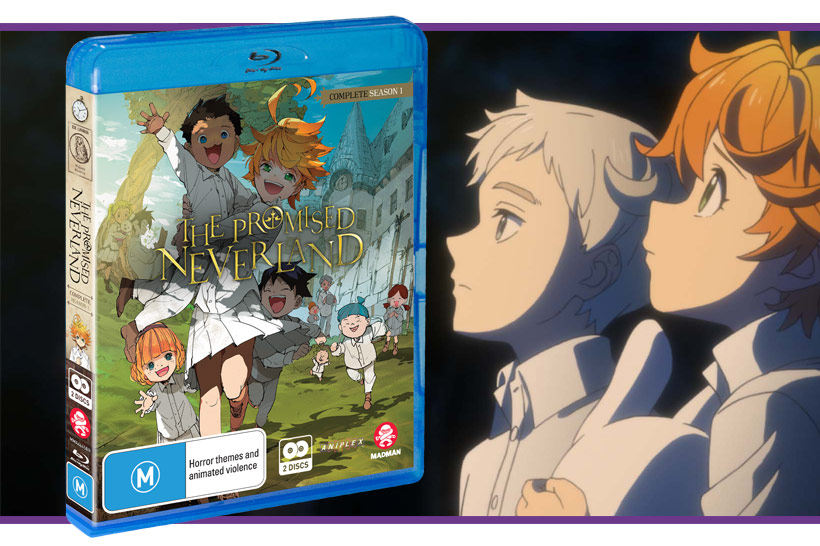 The Promised Neverland seems to have rapidly made its presence known amongst anime fans. Going in deliberately free from spoilers and trying to stay clear from broader online chatter, it was with a sense of intrigue and excitement that I dove into this fascinating release.

The Promised Neverland Complete Season 1 is set in Grace Fields House where a family of orphaned children live under the supervision and guidance of the house’s Mother. Rolling green fields, rustic wooden halls and a seeming lack of technology or broader civilisation gives the impression of an idyllic life for the resident children. Like all good stories, things are not quite as they seem and it falls to three of the eldest children in the house – Emma, Ray and Norman – to slowly uncover the truth behind the seemingly perfect world they inhabit. 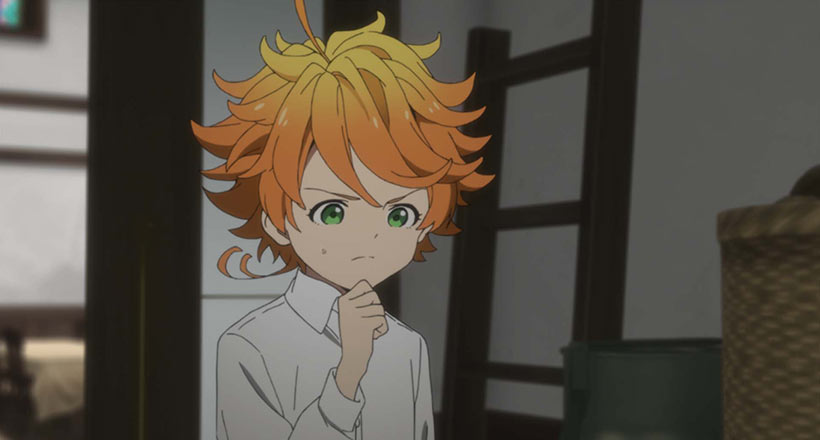 The Promised Neverland Season 1 truly straddled the great divide when it comes to popular fiction in the realm of anime, manga or comics. You’ve got an interesting setting designed to play on a rather obvious premise (take the happy home and twist it into something sinister) that can really fall into problematic tropes if not handled correctly. At first I was concerned this was the case as it showed its hand a little early and the horror/thriller element would be diminished, but by carefully handling the premise and its characters with restraint it fails to become one-dimensional.

Instead, the series retains the elements of a thriller before morphing fluidly into a prison break narrative while gradually peeling away various parts of the world in which its set to add context but not take the fun out of the bigger mystery. The pacing retains a sense of energy and excitement without becoming overwhelming and did a great job of scattering in enough cliffhangers to burn through the 12 episodes that make up the series in record time. 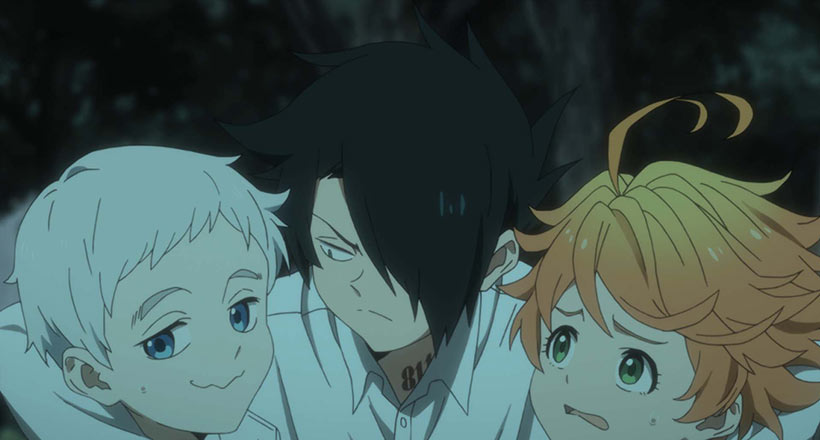 The main cast are well-realised and, while possibly a little unrealistic given their ages and their relative psychological development, remain engaging. The real strength here is the antagonists though. Isabella initially comes off as a caricature, but as the series wraps up we get more insight into her character and the journey that lead her to becoming the head of the house. It was also fascinating seeing how the breadcrumbs sprinkled throughout the broader series lead to a really solid conclusion for this season.

On race and Sister Krone… 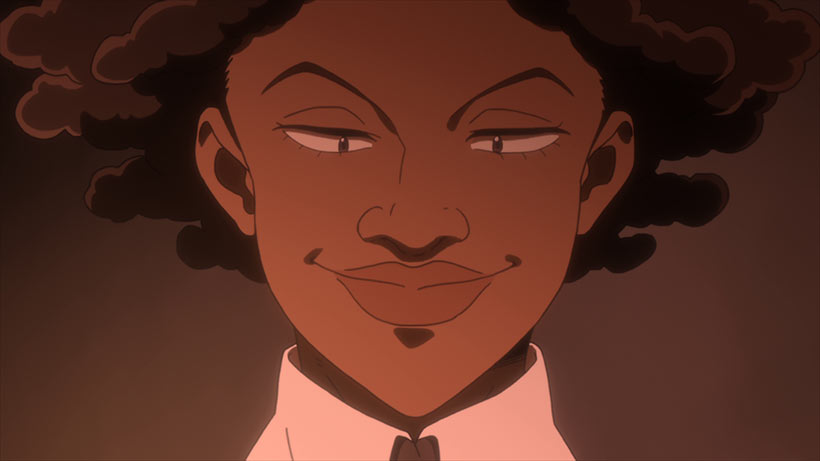 In speaking on the antagonists in The Promised Neverland Complete Season 1 it’s important to look at Sister Krone for a number of reasons.

Japan doesn’t have a stellar history when it comes to the representation of people of black heritage in popular culture, with exaggerated noses, lips and body proportions often harking back to offensive depictions popularised in Western media. While there have been attempts taken to reverse this trend (such as Afro from Afro Samurai or, if we’re going back to the 80s, Claudia LaSalle from Super Dimensional Fortress Macross), contemporary discourse suggests problematic representation of people of non-white heritage in anime (and by extension manga) persists.

For the anime adaptation of The Promised Neverland, Sister Krone’s design in many ways has been toned down from the original manga but still suffers from stereotypes in her body proportions and frequently has her face contorted into eccentric expressions that, intentional or not, echo the issues born of caucasian-dominated entertainment industries and how they historically depicted black people in popular culture.

It’s conflicting because the character herself is incredibly interesting – she’s a product of her environment and the repression placed upon her by the system. She applied hard work and extreme mental fortitude to achieve her role and status. She worked through a system meant to oppress her and treat her as a piece of inventory rather than a human being to come out the other side in a position of authority and increasing status.

But in looking at how The Promised Neverland works through this, it still isn’t enough to remove the proverbial shackles from her youth. She continues to serve under a caucasian leader in a white environment – both in appearance as well as uniform.

She is mentally fractured by the system, and while outwardly obedient, harbours a resentment for the authority and tyranny of the broader society they operate within.

Sister Krone has tremendous potential, which is what makes her visual presentation disappointing in the broader narrative that does an otherwise commendable job of demonstrating the cycle of control and abuse in authoritarian regimes, how youth can be corrupted by a system designed to protect them and how powerful organisations (whether it be government or extended to the private sector) can treat people as cattle or tools.

Sister Krone is fractured. She has been disempowered. But she is strong-willed, physically powerful and boisterously good fun with the children. Though that in itself is interesting as it can also play into the depiction and writing of black characters where their physicality is used to reinforce animalism and traits of other-ness.

As a character Sister Krone leaves me conflicted. There are elements that unfortunately rely on stereotypes born of ignorance and racism.

This last point doesn’t need to be debated – racism is racism.

But as a character she’s fascinating and her representation not only adds to the anime’s broader themes on authoritarianism, it in many ways reflects the issues facing many people whose physical attributes impact their status and opportunities within modern socio-political constructs.

As a coda to my thoughts on Sister Krone though, I want to acknowledge some great discussion by people far better positioned to do so than I.

I took a great deal of inspiration from Zeria’s piece titled “Let’s talk about Sister Krone”, which has also been adapted into a video essay on YouTube which you should really check out:

I also found some thoughts from @OhHeyDJ, an amazingly talented black artist which prompted some great discussion on Twitter:

I have some complicated feelings on Sister Krone in Promised Neverland that I’m still trying to parse. pic.twitter.com/GhNouSYNj1

Destiny Senpai has also published an interview with Sister Krone’s English voice actress, Rebeka Thomas. While it doesn’t delve into the character of Sister Krone herself, Rebeka shares her thoughts on where the future of anime and its relationship with the black community could lead. Destiny Senpai has included this as part of her project 28 Days of Black Anime which features spotlights on other black characters in anime and black people active in the industry (including both production and voice-over work).

As part of the deep dive journey for this review there were other resources which discussed black perspectives on anime that I want to highlight. Jay Gibbs’ paper, “Getting Black Anime Characters Right”, discusses his personal thoughts and feelings as an African American who has been fascinated with anime for many years.

Galilee Abdullah’s award-winning interview with William Bridges IV, Assistant Professor of Japanese at the University of Rochester, provides a more academic analysis of the historic and post-war impacts on Japanese popular culture and the relationship it has with African Americans.

I realise this discussion likely fails to capture even a fraction of the complex areas of race, representation and anime in both the case of Sister Krone and how it fits into a broader view of anime in general. In going into this exploration I wanted to take some time to share my thoughts, convoluted as they are, and the journey of sorts I went through. I think it’s important we continue to find opportunities to discuss topics such as these in broader circles and treat them as opportunities to learn more about the world and, critically, give a voice to communities often under- and misrepresented in popular culture so we can become better anime fans and better people. 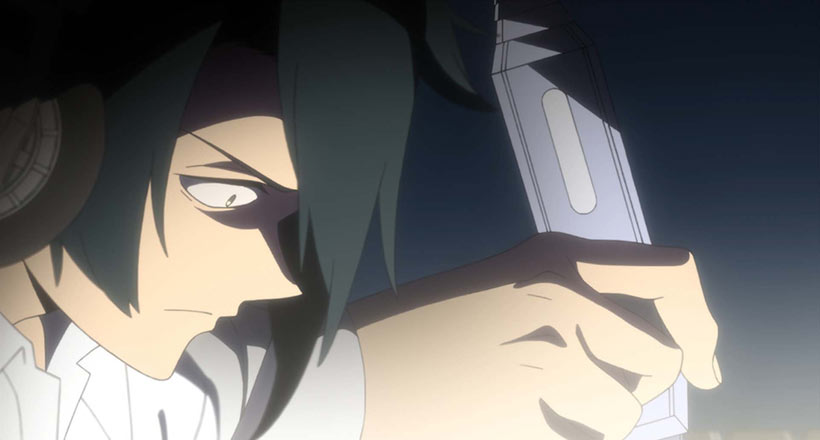 Beyond this discourse, the show in general is fully realised, fascinating and very much deserves the following it has gathered. What was refreshing is how it decides to conclude the series, allowing the production staff to do the rare thing and draw a line in the sand to bring a degree of succinct closure while opening it up for a follow up (which was handy as season 2 has been announced for release some time later this year in Japan).

The Promised Neverland’s production also warrants discussion as it feels quite unique compared to its contemporaries. The direction features an excellent use of bold colours and animation on facial expressions, especially the eyes, that come off as slightly less clinical than your average modern production. Long tracking shots are mimicked in certain scenes to add a sense of tension, and fish-eye lens styled distortions are utilised to great effect. 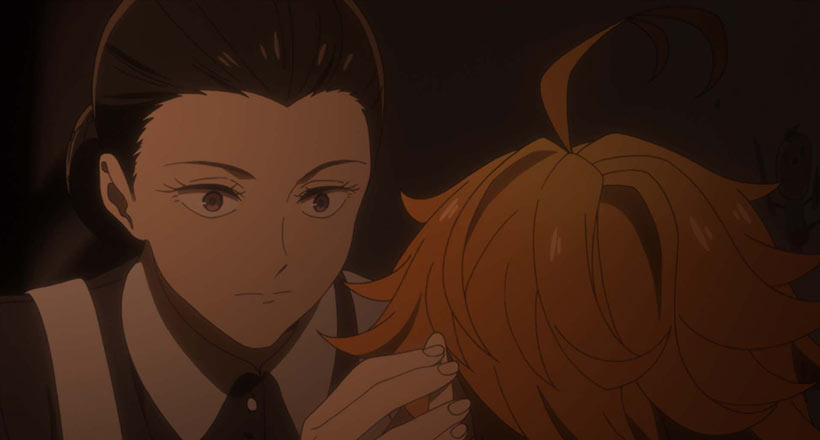 The local Blu-Ray release captures all of this without skipping a beat. Encoding is solid, its bilingual so you’re covered either way and I like how they kept the original Japanese credits in the ops and eds (something I’d like to see Funimation start doing). The only extras are creditless ops/eds and the inclusion of the teaser for season 2 which I thought was a nice little bonus!

The Promised Neverland Season 1 is bold, engaging and wonderfully executed, held back only by its physical depiction of Sister Krone. I’ll be looking forward to see how the story will evolve in the next season when it hits later on! 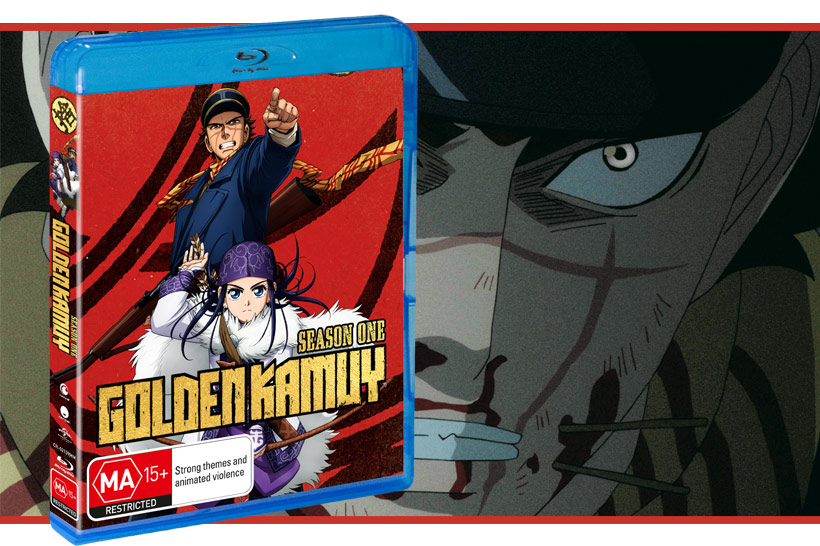