Fruits Basket triggered some sizeable waves when it hit anime fandom in Japan and then around the world in 2001. With the new adaptation hitting streaming service at the time of writing, Fruits Basket The Complete Series Blu-Ray is the perfect opportunity to revisit the adventures of the zodiac-cursed Sohma family.

Tohru Honda finds herself secretly living in a tent in a forest when she’s kicked out of her grandfather’s house following the death of her mother. When she inadvertently stumbles across the Sohma family’s house she also stumbles across the family’s secret and the curse of the zodiac that sees those afflicted turned into their animal form when hugged by someone of the opposite sex. Instead of losing her mind, Tohru’s gentle personality finds the whole scenario intriguing. Once the house’s elder, Shigure, learns of her unfortunate circumstance he offers her a room in exchange for helping out around the house. Over time Tohru begins to meet more of the Sohma family and those who bear the curse of the zodiac. With her unbelievably positive outlook infecting Yuki, Kyo and Shigure in their shared house, we see these disparate personalities and the fractured lives around them find common hope and reconciliation through Tohru and her ability to discover the good side of everyone (even the eccentric and cruel head of the family, Akito).

We’re now just shy of 20 years since Fruits Basket made this first transition into anime. Based on Natsuki Takaya’s incredibly popular shoujo manga series, this initial 26-episode TV series adaptation covers only a portion of the overall manga which was still being written at the time. There’s some telltale signs to this in Fruits Basket The Complete Series, particularly the gaps in exploring the Sohma family beyond those situated in Shigure’s house and the neat but very open conclusion to the series. This is interesting in and of itself given the show’s comparably luxurious length compared to the current norm of 12-14 episodes per season for anime on TV.

At the time there was considerable interest in the West for Fruits Basket, something that was also seen in the huge success the manga has had as well. For myself, the massive gap in time between it’s initial hit in the West and this Blu-Ray compilation provides a point of reflection. Back in 2001 I was an undergrad and had been madly in love with anime, especially shoujo anime, for years. Fast forward to 2019 and while that love hasn’t died down, the big change is that I’m now a parent and this has had a really interesting skew compared to my initial viewing of Fruits Basket.

Whereas before my main focus was on the interplay between the characters, especially Kyo, looking on at this show as a father really hit home in many ways. It’s given me a real feel for the huge impact of Tohru’s mother raising her as a single Mum and tremendous empathy for the rotten situation she finds herself in being wedged between homelessness and living with a rubbish extended family. Move a few episodes in to where Tohru’s grandfather’s situation changes so she can move back in with said extended family and we see first hand the kind of environment she was destined to live in. As a parent it pulls hard because while it’s portrayed in the context of this anime series as potentially outlandish, the truth is there are far too many children and teenagers living in similarly oppressive circumstances who don’t have the benefit of supernatural guardians to resolve their situations.

As Fruits Basket’s cast extends through the series, we see a recurring theme of broken families, fractious relationships and some really dark layers of complexity. While the way the series progressed through my eyes when I was in my early 20s was still moving, the shift to parenthood has opened up a whole new layer of empathy for the cast. Of all the things I was expecting going back into this series, this has easily been the most surprising and left me with plenty to think about. In this sense, possibly without intention (after all, I don’t think Takaya or the series’ director, Akitaro Daichi, ever considered an Australian dad in their 30s was in any way their target demographic for Fruits Basket…), it demonstrates that there’s some real depth to the storytelling here that can be enjoyed from a variety of viewpoints. 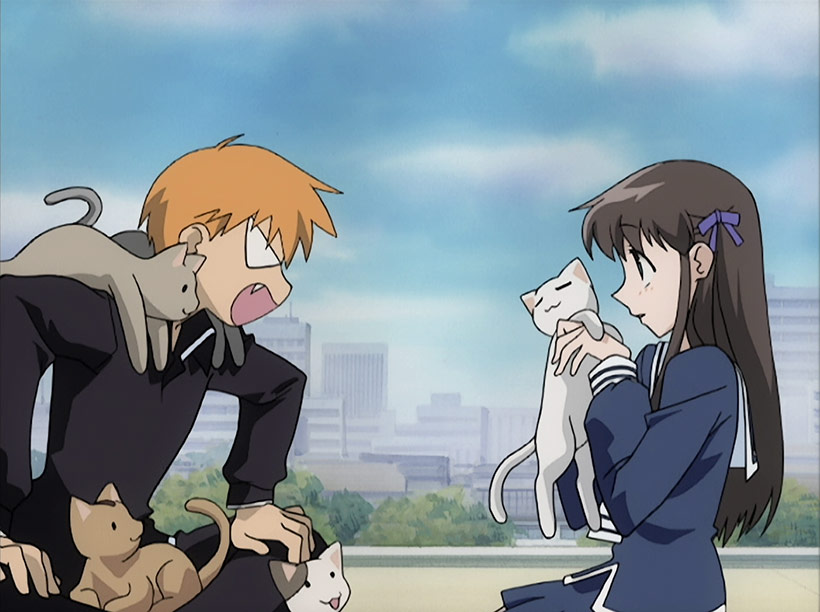 Something else I really appreciated with this in mind was the way it plays to contrast the more sombre core material with hyperactive humour. Takaya apparently took a number of issues with the direction Akitaro Daichi took with this adaptation of Fruits Basket. This ranged from character designs, seiyuu choices and his signature wacky comedic elements. Assuming Takaya’s happier with the 2019 adaptation, it’ll be great to compare the two as I found the wild swings from sombre to hyperbolic a great way to break up the mood and introduce scenes that had me genuinely chuckling.

Part of this may be down to personal preference – there’s huge echoes of Kodomo no Omocha when Fruits Basket flits between these emotional extremes, and I have a soft spot for that amazing shoujo series. The hilarious interplay between Yuki’s brother Ayame, Shigure and Hatori’s detached seriousness as a trio always made me smile, and I had another stupid fanboy grin when Kyo’s self-professed love interest, Kagura rockets into the scene with some awesome swings between eccentric comedy and sombre reflection thanks to everyone’s favourite seiyuu, Kotono Mitsuishi.

Time will tell if I’ve been caught in a weird emotional loop while watching Fruits Basket The Complete Series and if my perspective of this adaptation changes after I’ve watched the latest version. But I’m fine with that – it’s been great fun revisiting such a pivotal anime in Western fandom.

Which brings us to the package itself – Madman’s Blu-Ray release rolls the 26-episode run across 3 discs as part of Fruits Basket The Complete Series. Both English and Japanese languages are present, with the former being the original Funimation-produced dub from 2004. Extras are limited to a composite video featuring the dub cast giving a commentary to episode 24 – definitely a unique way to present it!

In terms of the HD transfer, we have lossless audio across both soundtracks in 5.1. For the video we have a software upscale as a result of the series being a digipaint production from the early 00s where target resolutions were all about standard definition. In this sense there’s not really a lot that can be done to extract an improved image at 1080p, but this package does have advantages over the earlier releases, particularly the Madman release. By carefully software scaling the image we have a native 24p production with limited artefacting hitting the picture compared to your typical TV or Blu-Ray player’s upscaling pipeline. Linework can still be a little soft and jaggy but it’s a definite improvement on the standard definition release. As this is a native 24p release it’s also free of any 3:2 pulldown artefacting and deinterlacing present in the NTSC to PAL conversion on the previous Australian DVD release. The final tick of approval is the use of a modern video codec which erases all the sins from earlier MPEG2 encoding.

At the time these video issues weren’t much of a problem given I was watching anime on a CRT TV back in 2004 and the benefits digipaint productions had over film transfers where MPEG2 bandwidth was limited more than made up for the other shortcomings. But in an era embracing 4k with highly robust display standards and codecs, there’s plenty of reasons to enjoy Fruits Basket The Complete Series on Blu-Ray even if you have a previous release on DVD lying around. 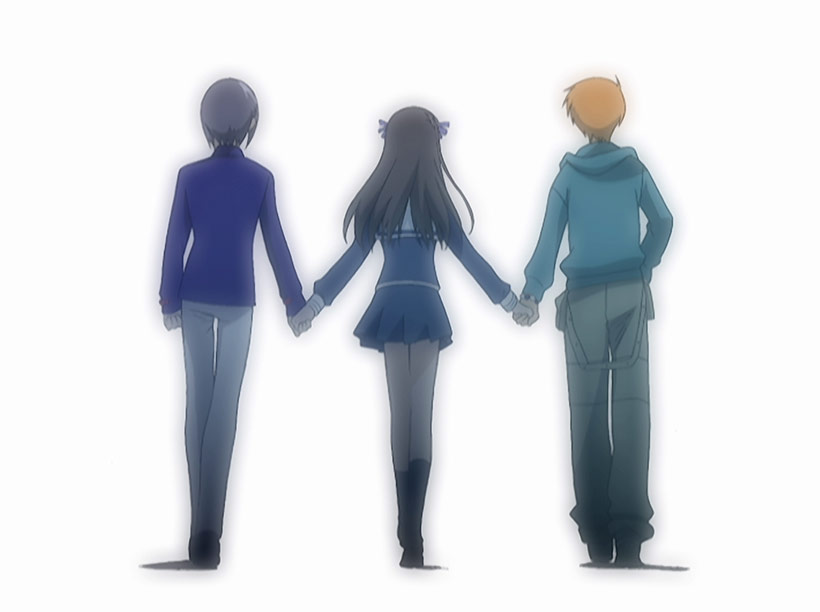 Fruits Basket The Complete Series is, unsurprisingly, very easy to recommend. The core story and characters are engaging on a number of levels, and the steady pace despite the series’ length makes it engaging. Time will determine which anime adaptation ultimately becomes the reference standard for the Fruits Basket fanbase, but right now in May 2019, this 17 year old release remains fantastic viewing.