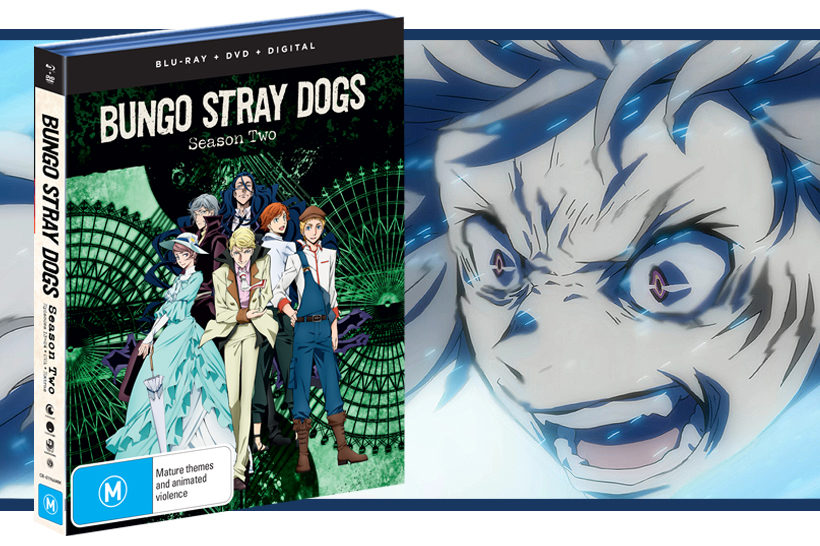 The Armed Detective Agency finds itself assailed from all sides as Nakajima Atsushi, Osamu Dazai and the gang are engulfed in a turf war between the local Port Mafia and an American organisation called the Guild. With each group made up of members with supernatural abilities, the stakes intensify as new and dangerous ability users enter the fray, old grudges grow even more sour and the city of Yokohama becomes a battleground. In the midst of it all, Dazai’s past in the Port Mafia comes to light, and the events that spurred him onto his current path are revealed. 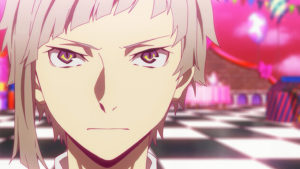 Following the events of the first season, Bungo Stray Dogs Complete Season 2 contains two narratives in one; an adaption of the Bungo Stray Dogs light novel, The Dark Era, which explores Dazai’s past as a Port Mafia executive, and a continuation of the Armed Detective Agency and Port Mafia’s confrontation with the mysterious Guild. Following my review of the first season, I can happily say that while it lacks in similar areas as its predecessor, season two of Bungo Stray Dogs is a veritable improvement over the series’ first instalment. It is difficult to describe what exactly changed, but the second season definitely benefits from getting to play in the sand box that Bungo Stray Dogs Complete Season 1 created. Season two essentially gets to utilise shiny new scenarios and character arcs based on what has already been established, supported by what came previously rather than having to balance the introduction of new core characters and world-building. While the corny and melodramatic aspects of Bungo Stray Dogs are still present, they are much more toned down to fit in with the serious moments of the show. This is probably in part due to the Dark Era portion of the season which required season two to be much more tonally balanced if it was going to launch head-first into the nitty gritty activities of the Port Mafia and Dazai’s bloody past, and it works well.

The adaptation of The Dark Era light novel was easily my favourite portion of Bungo Stray Dogs Complete Season 2. While I haven’t read the actual novel and can’t speak for how good of an adaptation it is, I appreciated the change of pace and the exploration of Dazai’s time in the Port Mafia and his relationship with mafia colleagues Sakunosuke Oda and Ango Sakaguchi. These episodes also do wonders for Dazai as a character in general, as they expand on elements of his past hinted on in the previous season and explore the darker aspects of his personality while keeping his role as a Port Mafia executive fun and exciting. Oda is also a great addition to the cast, with his relaxed and loyal demeanour serving as an effective focal point for the Dark Era arc as the situation evolves and becomes more complex and deadly. This portion of the season also contains one of the better applications of a character’s supernatural abilities, with an initial fight between two characters that can predict several seconds into the future attempting to fight each other as they each predict what the other will do. While the Dark Era arc was extremely ‘anime’ in place (solid concept bogged down by needlessly complicated execution and exposition), it remains enjoyable and was an effective re-introduction into the series and expansion of the Bungo Stray Dogs world. 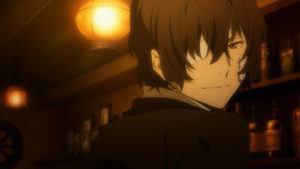 When the series returns to the story of the Armed Detective Agency, we’re introduced to the Guild, and American supernatural ability wielders organisation made up of characters named after American literary figures (save for Canadian Lucy Maud Montgomery). While the Guild and its leader Francis Scott Key Fitzgerald’s overall motives are muddled and not particularly interesting, the more personal goals of its members are understandable and it doesn’t bog down the series too much because the shiny stuff in-between makes up for the gaps in logic. To this point, the general content of this season is more engaging and makes the gaps easier to ignore. Interactions and arcs for main characters like Atsushi and ex‑Port Mafia assassin Kyouka are more fleshed out and enjoyable, with season two dedicating a good chunk of its time to Kyouka’s sense of belonging and her friendship with Atsushi. The second season also handles Atsushi’s time in the orphanage more tastefully by alluding to it less frequently (as in not every single episode using the exact same dialogue and visuals) so his situation is much more sympathetic and not overly melodramatic to the point of parody. However, while the emotional payoff for Kyouka and Dazai’s stories are satisfying, Atsushi’s past at the orphanage culminates in a reveal that had me wondering whether I’d somehow missed vital content to the story. 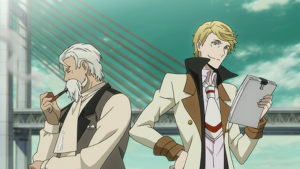 Bungo Stray Dogs Complete Season 2 has improved the tone of the series and expanded on its internal world and mythos through the exploration of Dazai’s past and the introduction of the Guild and their goals. There are issues regarding the clarity of these goals and fans of characters from the Armed Detective Agency other than Atsushi and Dazai (and perhaps Ranpo and Akiko who get their own whodunnit episode) may be disappointed in how little their favourites actually feature in this season. But the series has genuinely improved and I’m keen to see what’s in store for season three.