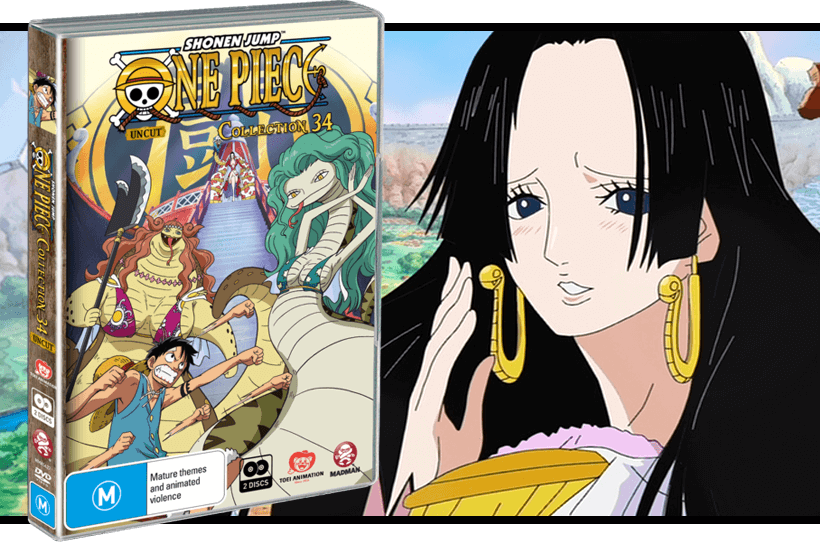 In the last volume of One Piece, the Straw Hats were disbanded by Bartholomew Kuma, who sent them flying off in different directions. In the wake of his encounter with Kuma, Luffy is marooned on a mysterious island called Amazon Lilly, where beautiful women rule the land and believe that strength equals beauty and men are forbidden. 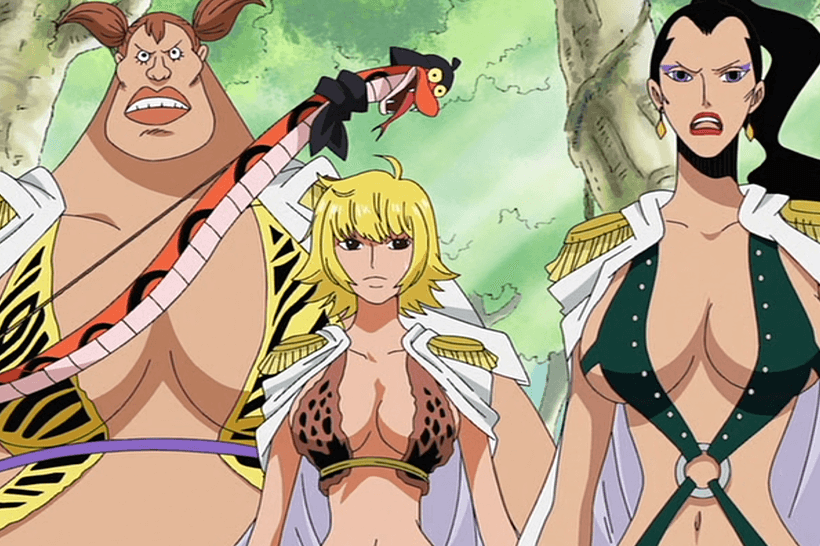 This volume sets the scene with our main protagonist Luffy hiding out with Marguerite while the other ladies of Amazon Lilly are on the search to try to hunt him down. Luffy tries to shed light on why he is on their island and that his crew have been separated. Eager to get back on track and find his crew he requests that Marguerite lend him a boat so he can set sail. Marguerite explains to him that there is no way off the island due to the amount of sea kings, the only way that their Empress is able to go back and forth is due to her boat being operated by two sea snakes, which mask their presence. 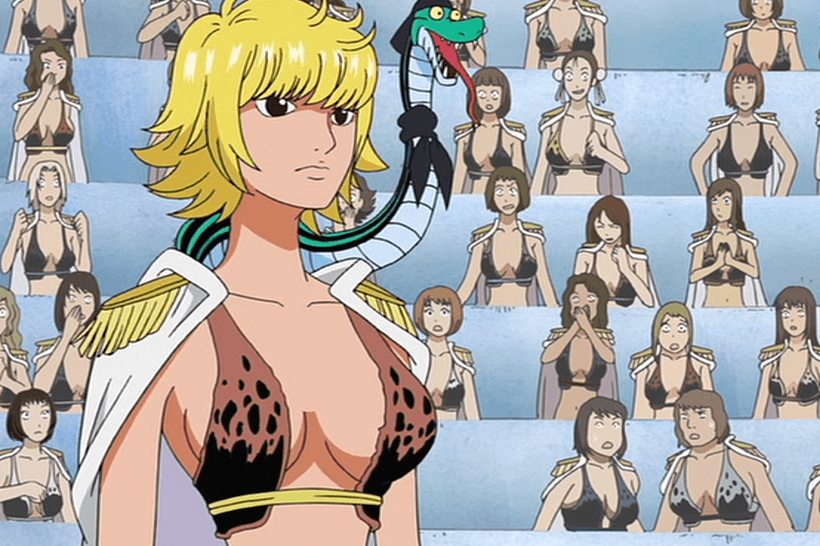 The series then pulls focus on the Pirate Empress Hancock returning to the land of Amazon Lilly (She is the Empress of Amazon, Lilly, Captain of the Kuja Pirates and also one of the Seven War Lords). On the way in, a government ship is waiting to conduct some business with Boa, It’s Vice Admiral Momunga and his crew. He states that the notorious ‘Fire Fists Ace’ has been captured by the world government. He’s to be publically executed at Impel Down (The Great Underwater Prison) within 1 week. All Seven Warlords are to attend as the threat of White Beard starting a war to rescue him is imminent. Boa refuses the Vice Admirals wishes as she plays by her own rules – due to this, things get heated and we see a glimpse of her Devil Fruit power – the Love Love Fruit. With this she shoots the Love Love Beam – which makes anybody’s guilty thoughts swimming through their hearts consume them and turn them to stone. After turning Momunga’s entire crew to stone, he says that she has 2 days to decide or the World Government will revoke her title as one of the Seven War Lords. 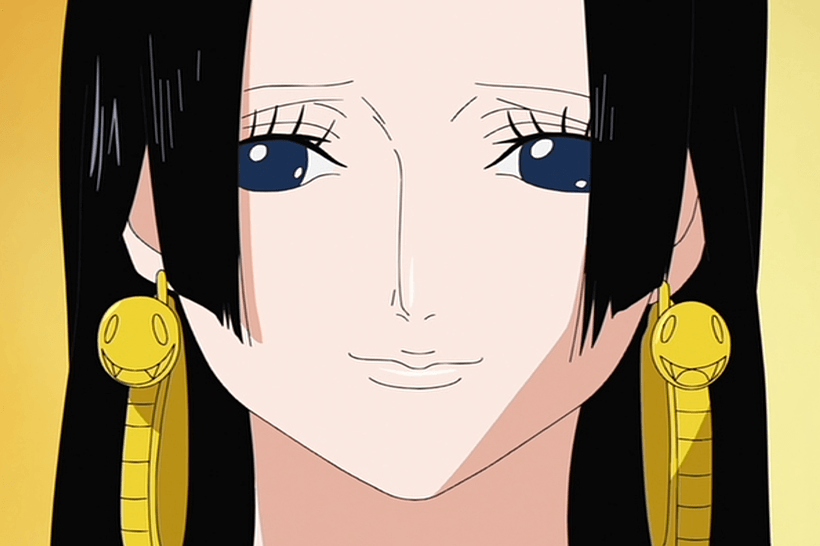 The Empress and the Kuja Pirates return to their kingdom of Amazon Lilly and show off their massive haul from their journey. The Snake Princess Boa returns to her castle for a much needed bath. After Luffy’s conversation with Marguerite, he realises that the only way off the island is to get access to the ship that is run by Sea Snakes to see his crew. So in Luffy’s mind – what do you do? Look for the biggest damn building in the joint and hope the big cheese is there. Upon looking and getting hunted by other Amazon Lilly warriors, Luffy Slips and falls through a roof – you guessed it right into Boa Hancock’s bathing room. Boa is in shock that there is even a man on the island – let alone where she’s bathing. Luffy being the friendly dim-wit he is – notices a mark on her back and says it looks familiar. This is a secret that Boa and her two sisters would die to protect, she tried to use the Love Love Beam on Luffy twice, but had no effect (Does this mean he is pure of guilty thoughts? Similar to how Perona’s powers wouldn’t work on Ussop?). Luffy eventually gets caught by the Kuja Pirates and taken into custody for execution. 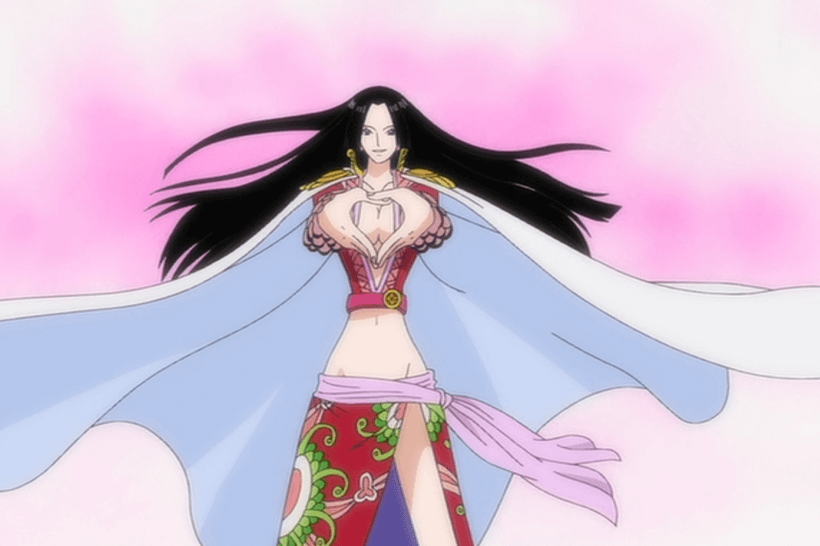 Over the next few episodes of the series, we see Luffy on execution isle, with Boa interrogating him. Luffy tells his side of things, but due to being male – Boa won’t take a word of it. The lovely Marguerite sticks up for Luffy (Against her Empress) and gets turned to stone!

At this point I’m thinking – what the hell? I thought Boa was going to be a cool character, but all she’s doing is making me hate her – she’s vain, mean and doesn’t treat her people with much respect. At one point Boa says “No matter what my people do, they will support me, because I’m beautiful, You must agree?” In reply Luffy says, “No, you make me sick”. Luffy knows how a good leader should treat his people and this isn’t the way. This fired Boa up and Luffy is to be put to death by Boa’s two snake sisters: Marigold & Sandersonia. 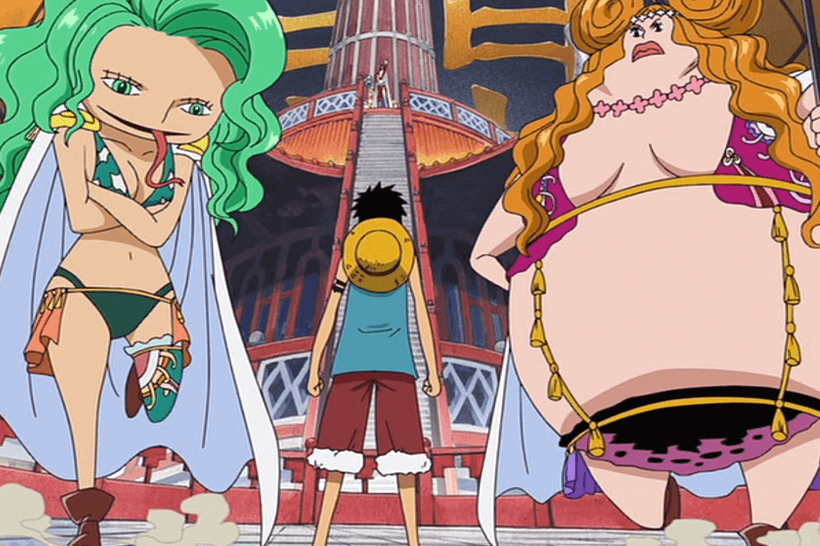 After an epic battle and seeing glimpses of the power Haki (not giving too much away – but this is something Luffy will utilise in the future), the battle ends and Luffy defeats the sisters. Luffy gains the respect from Boa Hancock for covering one of the sisters marks on their back during the battle – which would reveal the secret to their past to people which would have devastating effects. Marguerite and her crew are returned to normal and Luffy is now invited to Kuja castle as a guest.

From here I got to learn about Boa Hancock and her sisters past – in which she describes to Luffy, it explains a lot of things to why she’s so mean, why she has such mistrust toward males and her hardships, this episode I found a really good way to connect with the character and understand her. After Luffy hears her story he realises that they have a common enemy and gain more respect for each other. Boa agrees to help Luffy get back to his crew and set sail for Saobody Archipelago. 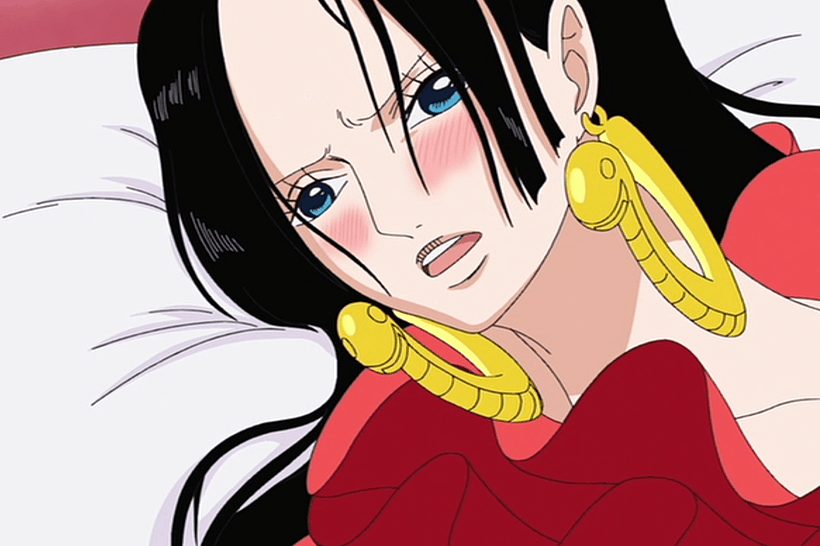 After a bit of background story – we get some fun episodes of Luffy enjoying festivities and feast with the ladies of Amazon Lilly, doing similar gestures and songs that he did with his crew. This made me miss the crew a bit in this episode and wonder – where are they, what are they doing while Luffy is having all this fun? 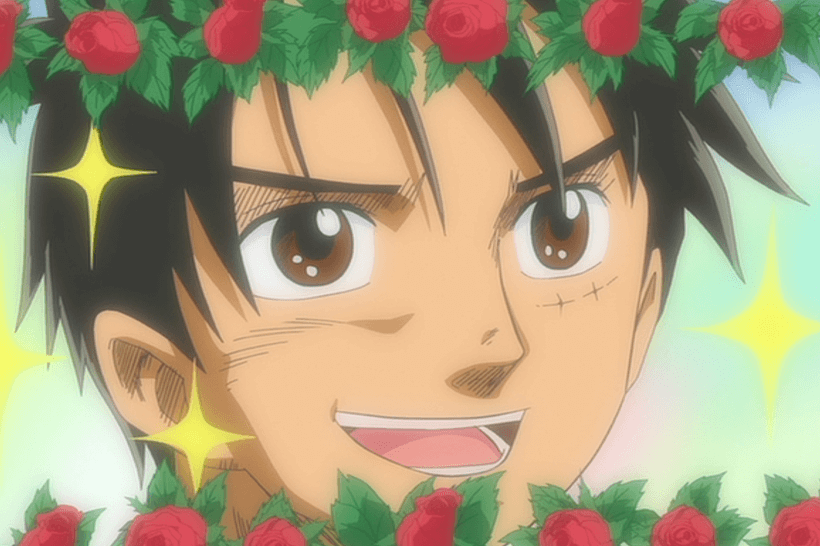 During the festivities – all the woman are trying to touch Luffy and fondle him, but he escapes with his friend Marguerite and bumps into Granny Gloriosa (former empress of the Kuja Clan). In conversations – with Gloriosa, Luffy discovers that not only is Boa part of the Seven War Lords, also that his brother has been captured and is to be executed. Luffy then decides that finding his crew will need to be on back burner and he will set out to Impel Down to rescue his brother with the help of Boa Hancock and her title of ‘Warlord’. After this we get told that Boa has been struck down with a fever. Here I am going – great! Now how is Luffy going to get to Impel Down and kick some government arse? It turns out – the brutal Boa has cracked and developed feelings for Luffy, feelings of love & infatuation. The moments that follow in future episodes are pure gold of seeing Luffy & Boa in loving situations – which are more so Boa delusions. 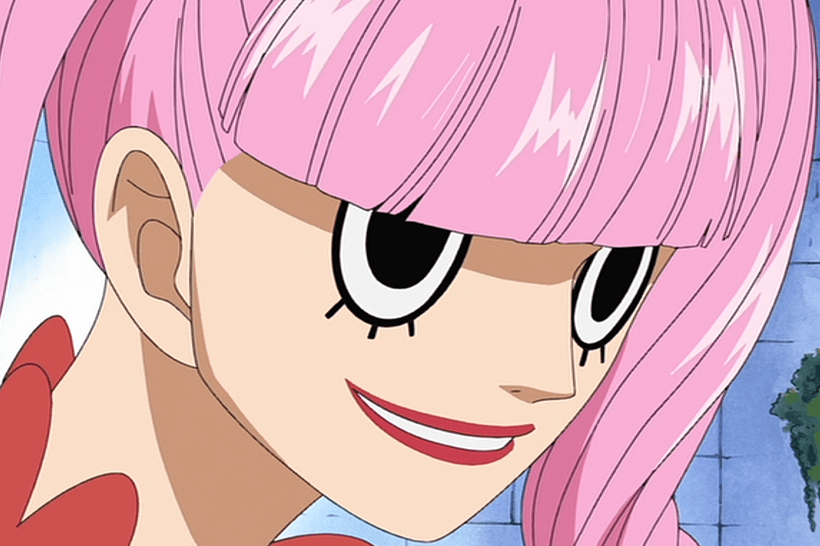 The end of the second disc concludes with filler episodes of the rest of the straw hat crew – where they are and how they are surviving. I’m really glad for this as I was starting to miss the rest of the characters and hoping it won’t be too far off from them connecting again, stronger, harder, better! Lots of laughs in these episodes – look out for the Sanji part – it will have you in stitches. 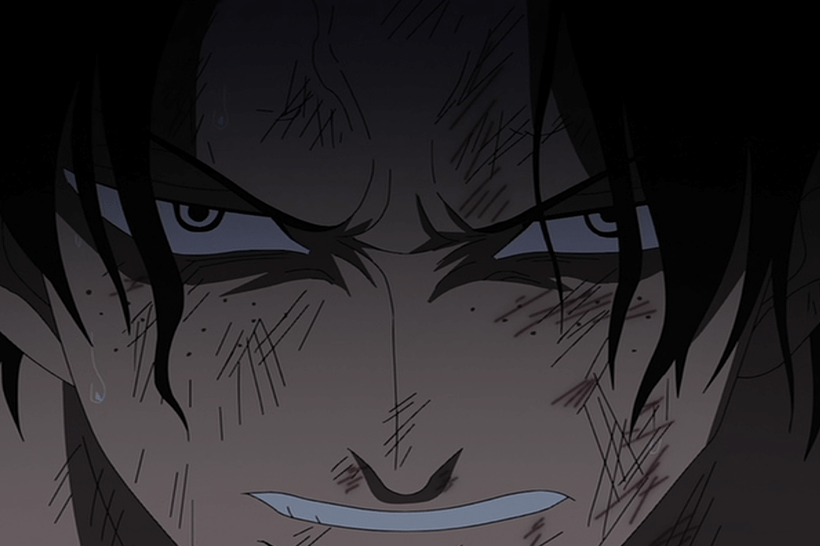 I really enjoyed this collection, it had some nice progression in the story and without dragging it’s feet too much got back to the original character that we all enjoy and miss. As with most One Piece episodes it has plenty of laugh out loud and emotional moments, with every disc you feel like your growing with the characters and getting more insight into their personalities, I love it! I’ll be hanging for the next disc – I think before too long – we will have a crazy battle on our hands at Impel Down. Keep an eye out for Madman’s March releases! 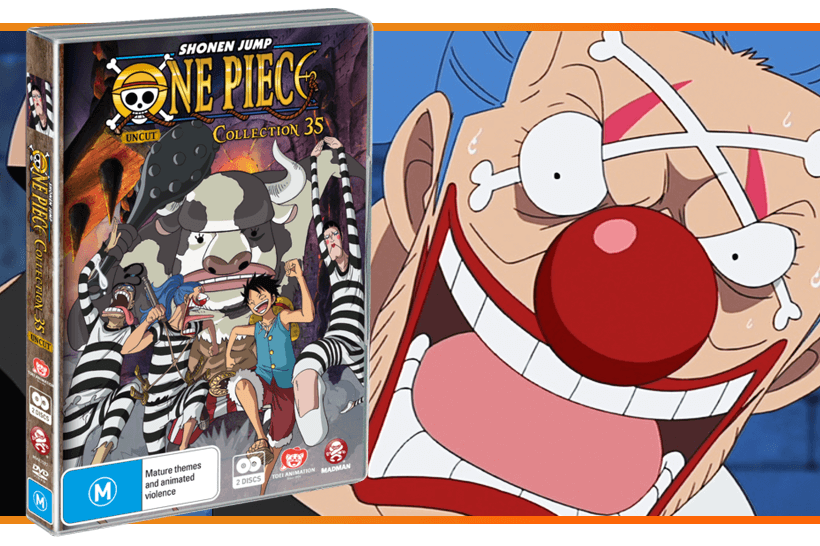 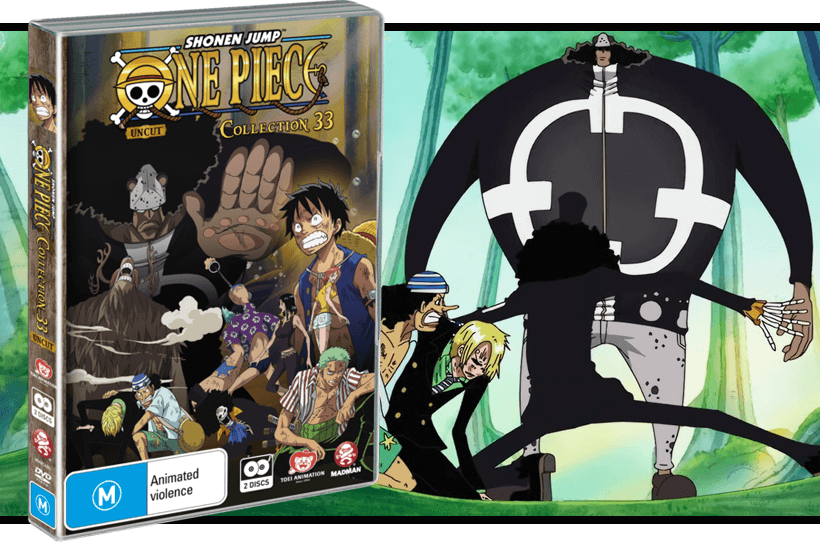 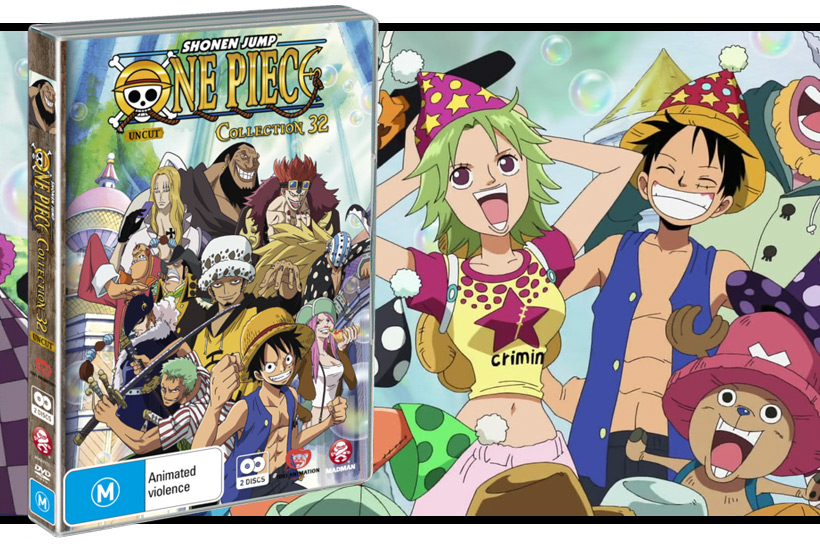 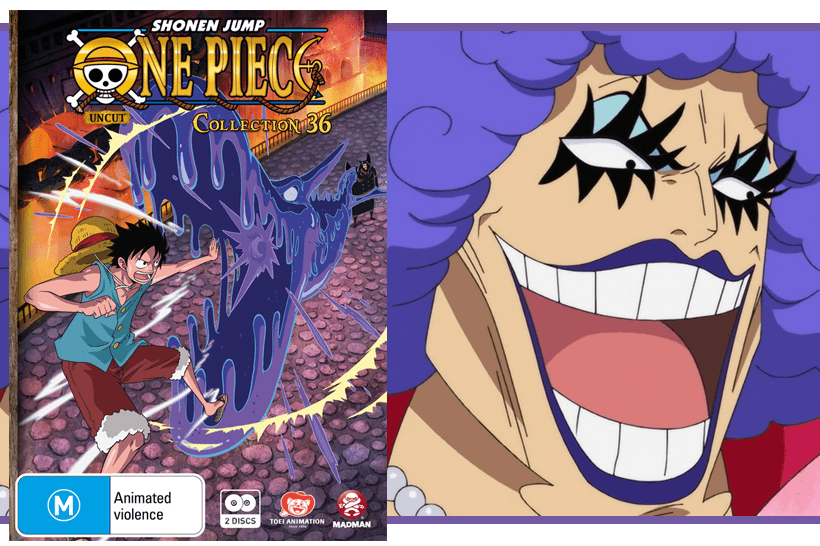