In a future with a ruined Earth and Digital Humans, Expelled from Paradise is an action adventure with a surprisingly touching end. Floating above the abandoned planet, DEVA is a cyber universe where humans have abandoned their physical bodies and now exist in servers. When an unprecedented cyber attack is traced from Earth, DEVA dispatch their System Security to investigate. Third Office Angela Balzak is given a prosthetic body, a sweet Arhan Mecha and sent down to the planets dusty surface to put a stop to the attacks. 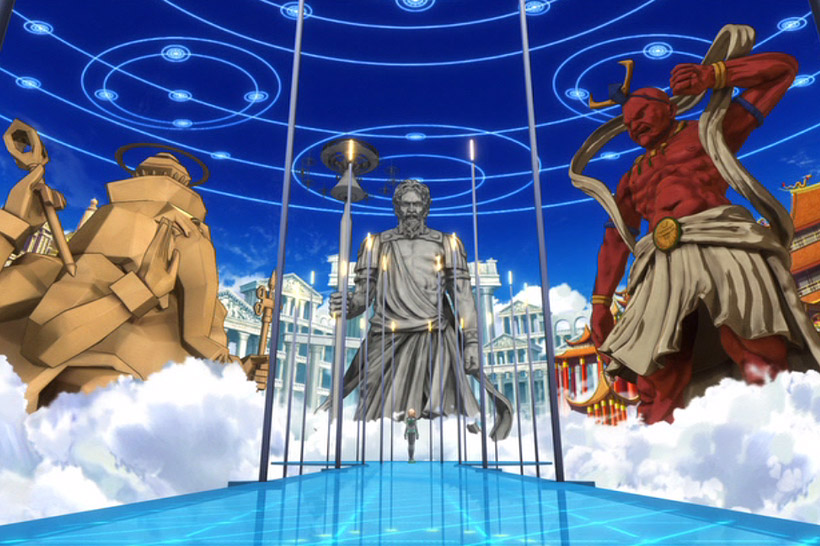 Once on the surface, Angela meets up with a local agent named Dingo. He knows his way around and immediately cuts Angela’s connection with DEVA in order to be more covert. While on DIVA, Angela comes across as hardworking, mature and reliable as she has climbed up the ladder to Third Officer. On Earth however she is stubborn, selfish and impatient as she gets used to being inside her physical body, and dealing with Dingo’s unique way of doing things. Their personal opinions on life in general don’t align, and although there is friction between them they still work together for the bigger picture. 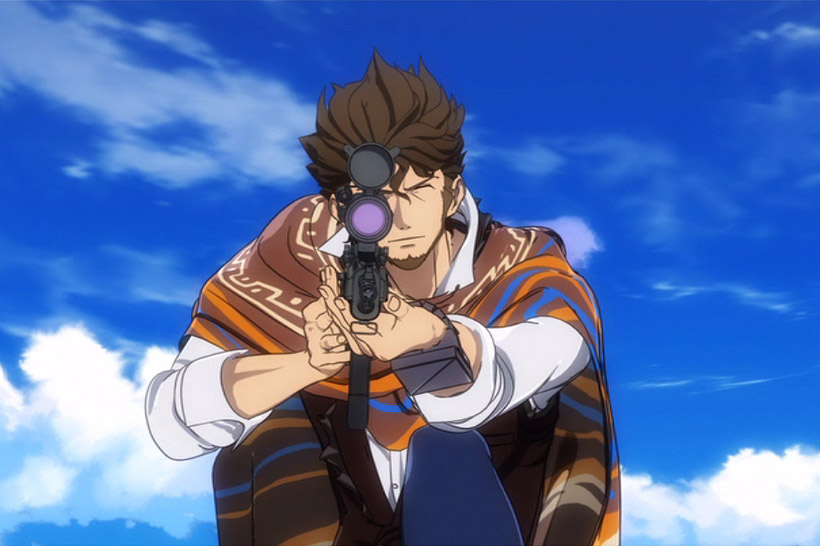 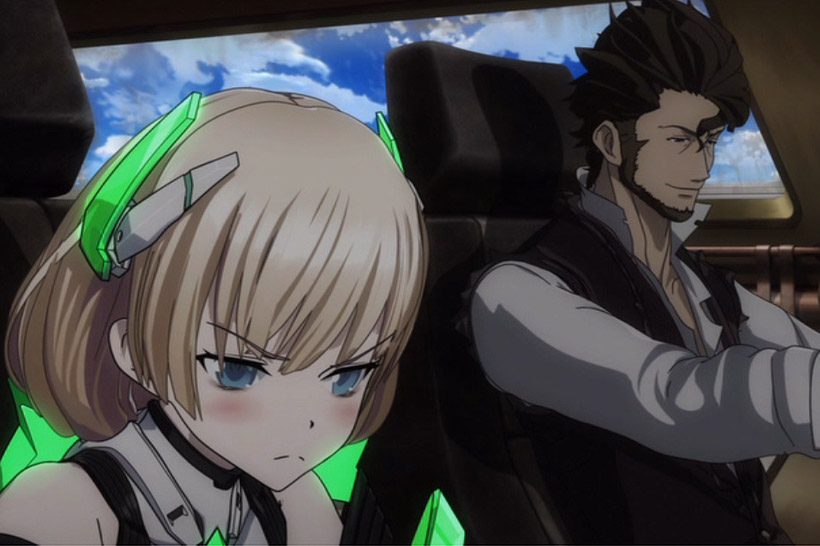 The hacking messages coming through to DEVA are more of an address to the population, rather than any sort of sinister attack. An invitation from someone called Frontier Setter, for anyone willing to join him on a deep space exploration. What Angela thinks is a mere disruption to DEVA, Dingo takes it literally and bases his research on that. Dingo and Angela’s toiling pays off, and they are lead to a remote location, to find a little robot waiting for them. Dingo decides to just walk out and say hello, which results in one of the best moment in the whole movie. 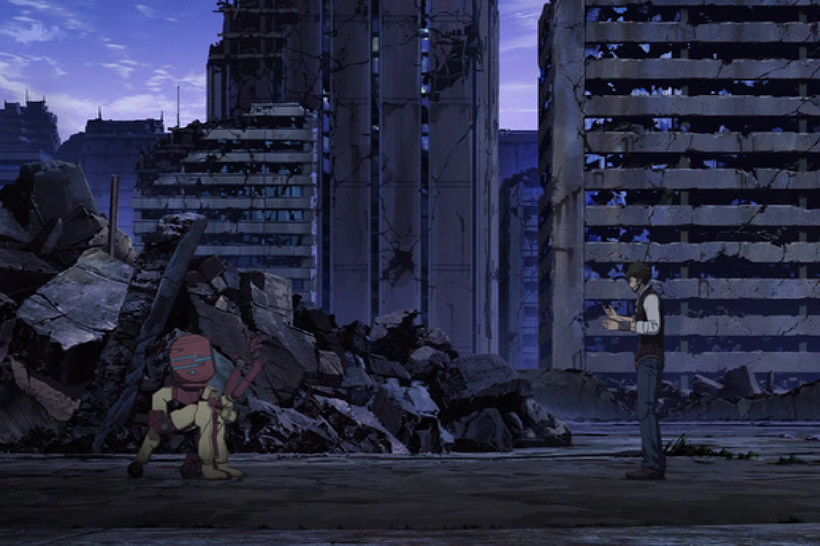 The little robot is in fact Frontier Setter himself, an evolved AI who became self aware over 100 years ago. This point is where the movie takes a completely different turn. I originally thought Expelled from Paradise was going to be a chase to catch a cyber criminal, turns into a race against time to get Frontier Setter launched safely. I absolutely love Frontier Setter, his personality is charming, logical and he genuinely wants to help humanity despite DEVA targeting him. 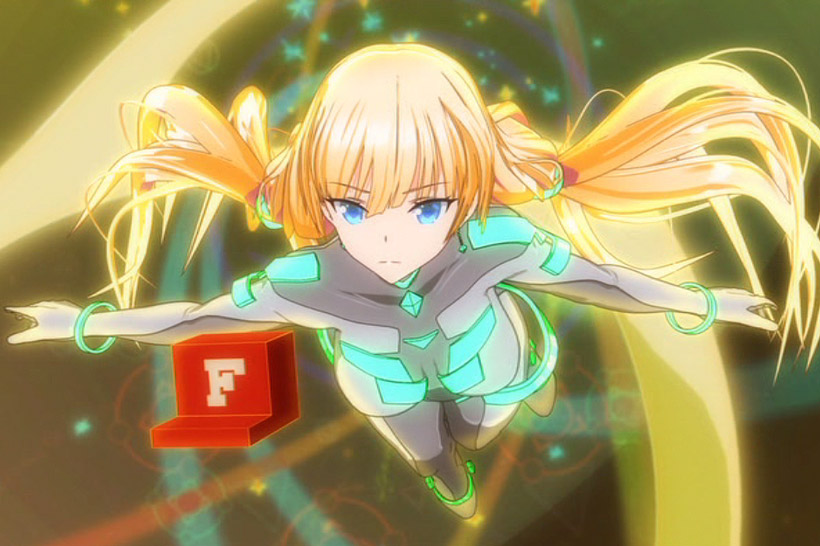 The ending is everything you could hope for in a battle between Mechs. It’s fast paced, and the tension rises as the launch time counts down and more agents close in. Waiting for any volunteers from DEVAs population, Frontier Setter holds out as long as he can with Angela and Dingo keeping the agents at bay. The CG animation is top notch in these last scenes, and it really shows how CG can bring out the best for Mech battles. They did seem to have a bit of trouble with Angela’s hair, but all in all the CG isn’t too bad. Angela evolves the most throughout the movie, and Dingo acts as more of a well rounded personality to even out her stubbornness.

I really enjoyed this movie, it had the right amount of action to downtime and provided a nice twist which kept the storyline fresh and interesting. With some big guns behind production like Director Seiji Mizushima (Fullmetal Alchemists) and Screen Writer Gen Urobuchi (Psyco-Pass) they delivered an original story from a theme we have seen many times before.  If you liked Expelled from Paradise I would recommend Ghost in the Shell, Psyco Pass and on a non anime note, Elysium with good ol Matt Damon.