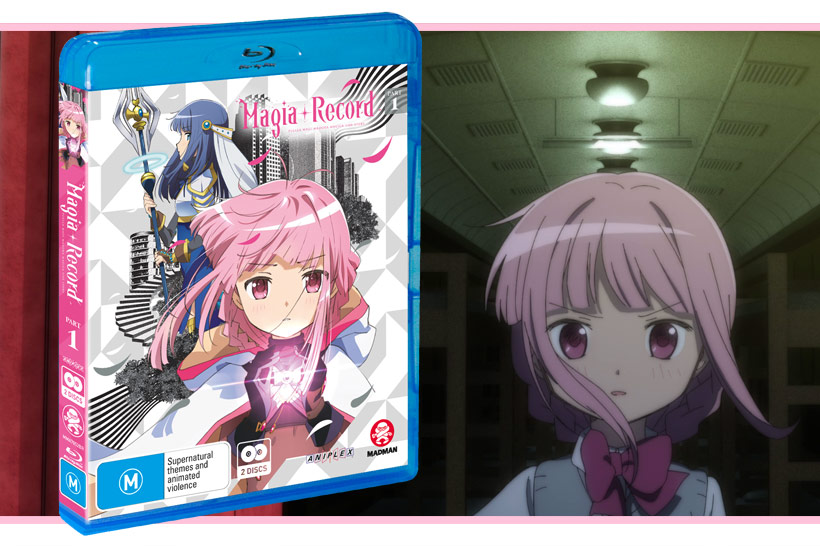 Magia Record: Puella Magi Madoka Magica Side Story Part 1 tracks the progress of magic girl Iroha Tamaki takes in trying to uncover the mystery surrounding her sister Ui’s disappearance. It all starts after getting one of those lightbulb moments while doing her twirly-whirly mahou shoujo duties in taking down one of the many the disturbingly weird witch phenomena assailing Japan’s urban landscape. Her journey takes her to Kamihama City where it’s rumoured that magic girls can escape their fate, only to stumble across the manifestation of new, unusual witches born of Uwasa, or rumour mongering. In Kamihama City she inadvertently joins up with other magic girls as their battle with the Uwasa draws the interest of the shadowy society known as Magius, resulting in conflict and confronting personal histories (and mistakes) the team has encountered as part of their collective magic girl experiences. 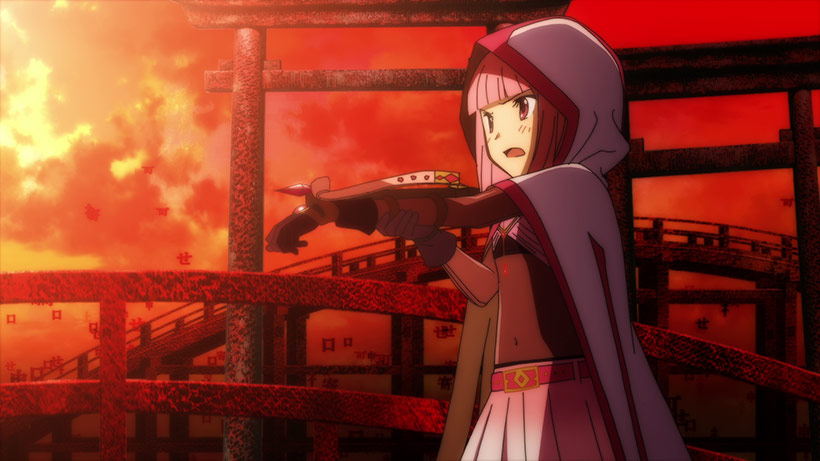 I’ll admit I was drawn to Magia Record: Puella Magi Madoka Magica Side Story Part 1 largely because of how much I enjoyed watching (and reviewing) the main Magoka Magica series a few years back. I have come away super pleased that what unfolded in Magia Record was a genuinely interesting show that was more than happy to revel in its obscurity and surrealism, perhaps to the detriment of a narrative as tightly focused as its predecessor.

But it also tries to do something a little different here which is great. The driving force for Iroha is tracking down the loose threads regarding her sister’s disappearance both from her visual memory, but seemingly from everywhere (and everyone) else. This detective angle plays out in interesting ways, particularly at the outset, leading her in a direction to start building up her own group of magic girls in the same sentai spirit enjoyed across the genre. 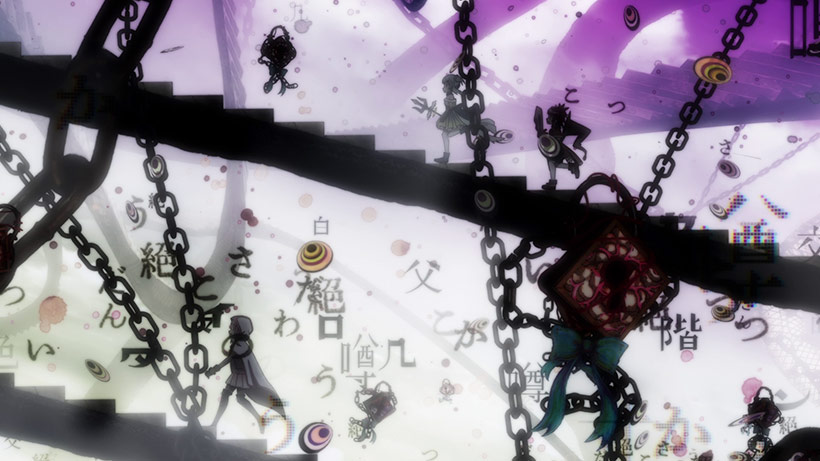 Except for when it doesn’t, because the battles with the trippy witches are kind of treated as secondary to exploring other, more interesting layers. The core groups Iroha joins up with all come with their own baggage, regrets and reflect the impacts of isolation, bullying and interpersonal awkwardness. True to its source material, the truth behind the witches and the tragic cycle which underpins the role of magic girls echoes that of Madoka Magica, but with a spin that taps into rebellion and empowerment bordering on blind admiration for either authority or counter-authority figures.

All of which is told at an often-breakneck pace that doesn’t let up with plenty of breadcrumbs to follow if you’re familiar with Madoka Magica.

I’ll admit that there were times where I found myself a little lost when the story threads start hurtling around, but felt like it took me on a fantastic burn in this crazy, surreal world that was happily blurring the divides that normally exist around mahou shoujo tropes, obfuscated narrative, visual elements reminiscent of the legendary Revolutionary Girl Utena and gorgeous, inspired animation. True there’s plenty of CG in there, but Shaft’s work on the production is so good – the framerate changes for the witches add to their unsettling nature, the colour palette is bold and bright and the animation is confident enough to allow the animators to leave some of those rough lines to offset the digital precision with some personality. 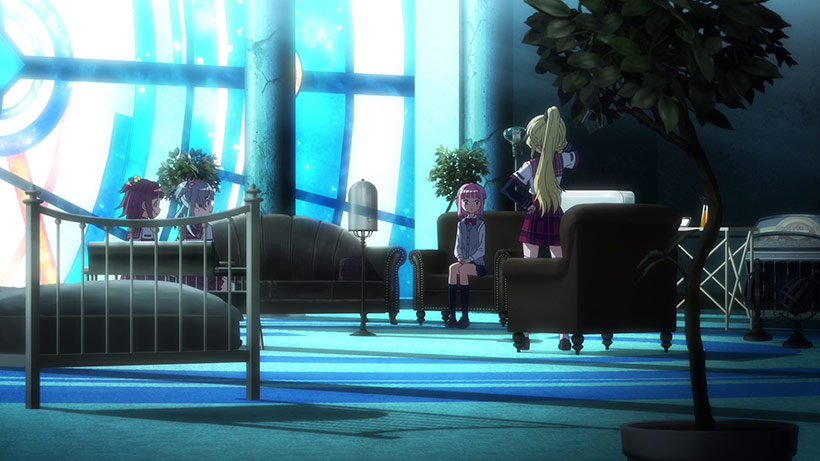 There’s more I could explore in this review, and while there aren’t any particularly controversial or amazing twists, I’ve rested on keeping it a little brief to encourage you to take in the journey at your own pace. I would normally recommend watching Madoka Magica first as it’ll help with some of the world building, but part of me thinks taking this in on its own would also be pretty rewarding.

For the local release of Magia Record: Puella Magi Madoka Magica Side Story Part 1, Madman has rolled the 13 episodes across 2 discs with bilingual audio. This encompasses the first arc of the TV series, and at the time of writing the second arc has only recently started airing in Japan with a third and final arc scheduled for release in late 2021. Extras are minimal but welcomed – we get the Magia Reports omake which are super cute and fun to watch, along with clean ops/eds and promotional trailers for the series. 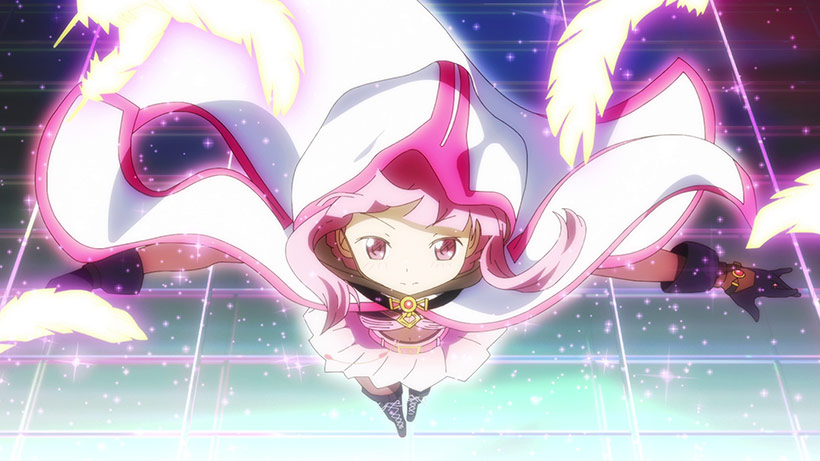 Magia Record: Puella Magi Madoka Magica Side Story Part 1, while not quite as subversive as its predecessor, makes for fascinating viewing. Stunning art direction and production is complemented by a great narrative mean I can’t wait to see where the story goes in the next two arcs! 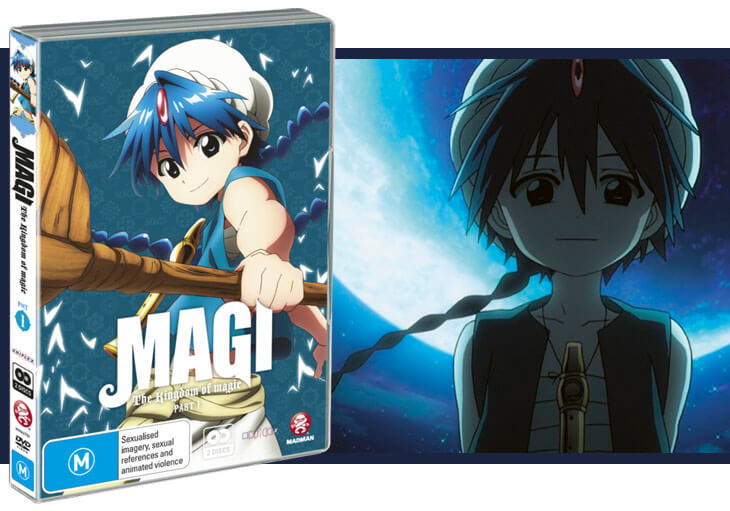 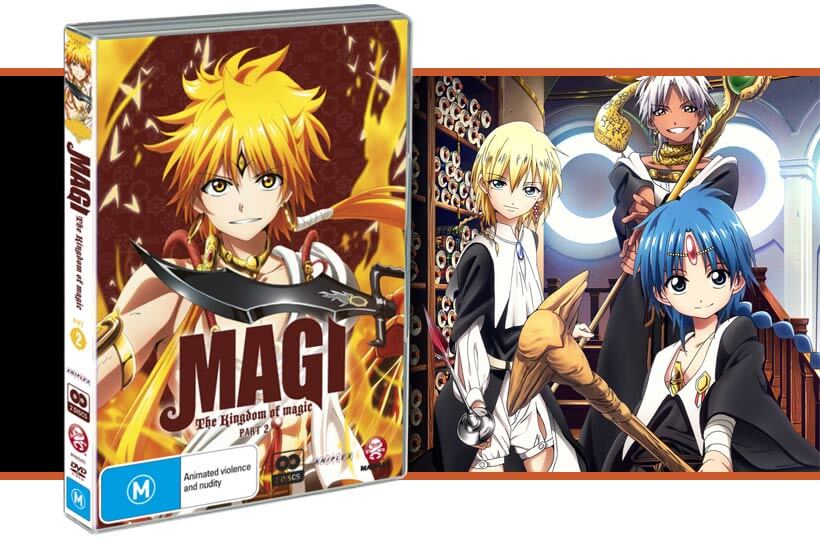 Review: Fireworks – Should We See it from the Side or the Bottom (Blu-Ray)