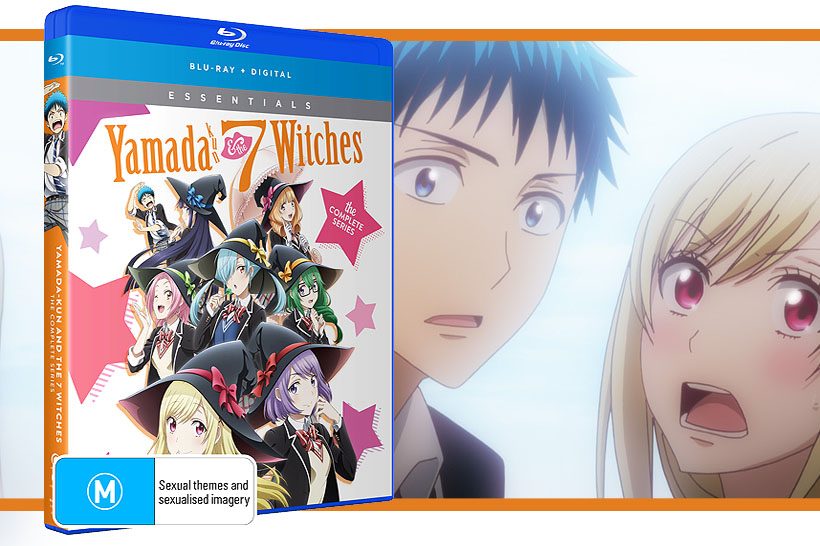 A student at Suzaku High School, delinquent Ryu Yamada is often berated by teachers for his attitude, and his irritation grows when he is compared to the studious Urara Shiraishi. But not all is as it seems at Suzaku High School, and after Yamada and Shiraishi share an accidental kiss, the two discover that they have the power to swap bodies. Using this bizarre but useful trick to their advantage, the two keep switching bodies to help each other out at school until fellow student Toranosuke Miyamura catches them in the act and coerces them into joining the Supernatural Studies Club to study their newfound powers. As the Supernatural Studies Club grows and the mysteries of Suzaku High deepen, the gang learns of the existence of seven witches – seven female students with magical powers. When Yamada and the Supernatural Studies Club begin to pursue the identity of the witches, they find themselves entangled in a school conspiracy that threatens to destroy not just their club, but their friendship as well. 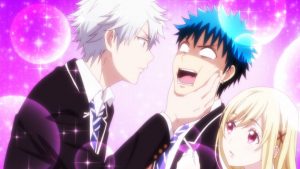 Yamada-Kun and the Seven Witches is an anime that genuinely surprised me. While the advertising around the show paints it as a by the numbers, pandering body swap anime, Yamada-Kun and the Seven Witches has a surprising amount of heart and talent that elevates it above other stereotypical and grossly indulgent shows in its category. I mean, be warned – there is still a lot of pandering. But underneath the layer of exhausting female underwear shots and manufactured excuses for onsen and beach scenes, there is a nougaty centre containing an enjoyable comedy with likeable characters and interpersonal relationships that are genuinely engaging and enjoyable.

Unfortunately, while Yamada-Kun and the Seven Witches starts off strong, it wains towards the halfway point once its main characters are introduced and the overarching plot is set in motion. As the Supernatural Studies Club is searching for the seven witches, there is limited time to address each of the witches in the twelve episodes available. While the first half of the series handles this quite well, introducing and establishing some of the witches over the course of a few episodes, it definitely feels rushed towards the halfway mark. After the first four are introduced, the witches start to feel like set dressing or items that need to be collected rather than actual characters, which is a shame since the character stuff is where the show excels the most. 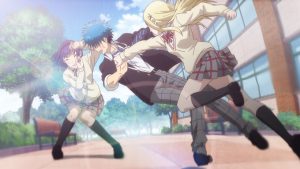 One of the elements that stands out most in Yamada-Kun and the Seven Witches is the strength of Yamada and Shiraishi’s role as protagonists and their chemistry with each other. Yamada is emotional and bombastic where Shiraishi is cool and considered, so they make a great comedic duo while also being complimentary personalities. There is also a neat thematic connection between the two based on the different ways they struggled to fit in at Suzaku High School and were ostracised by their classmates, which makes their growing bond with each other over the course of the twelve episodes really enjoyable. The frequency with which they switch bodies is also really fun, as they often swap for minor things like Shiraishi helping Ryu take a school test or because Shiraishi has a cold and wants to attend class without being sick. The relaxed attitude and comfort with which characters swap bodies makes the whole experience more fun, and it’s really only ruined by pointless pandering, like scenes that force Yamada into a girls-only onsen while he is in Shiraishi’s body.

Aside from Yamada and Shiraishi, the character stuff within the main cast is generally just really good – the Supernatural Studies Club members gel naturally with each other  and engage in witty and fun dialogue that earn the show its comedy half of the romantic comedy genre. In both dialogue and physical comedy they bounce off of each other in a way that keeps scenes energetic and enjoyable, which can mostly be attributed to the talent of the Japanese voice actors (more on that later). It reminded me of the interactions between the characters in season two of Snow White with the Red Hair, where relationships were clear and established and the fun was in watching interactions play out. 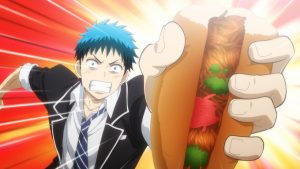 As I briefly touched on, the energy the Japanese voice actors give their characters is amazing and is a big part of what makes this show enjoyable. Given the body swap premise of the show, multiple characters swap bodies throughout the twelve episodes with three-way (and sometimes more) body swaps being common. The Japanese voice actors are nothing short of excellent during these scenes as each time characters swap bodies their acting makes it very clear who is in which body. This is best exemplified in one of the first episodes of Yamada-Kun and the Seven Witches when several members of the the Supernatural Studies Club swap bodies with each other. What could have been a confusing scene for the audience to establish who is who is actually crystal clear because of the intonation and delivery of the dialogue. These moments are a highlight of the series and always enjoyable. 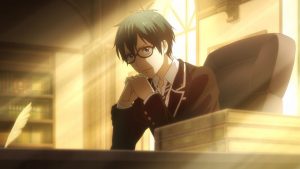 In spite of the pandering and middling second half, I was able to enjoy what Yamada-Kun and the Seven Witches had to offer. Aspects of it were genuinely refreshing to me, like the casualness in which characters like Shiraishi approached body swapping and the benign things they used the ability for. Unfortunately the frequency of the pervasive female underwear shots were a constant uncomfortable distraction that undercut a lot of what the show had going for it. This, coupled with episodes that felt like they were collecting inanimate objects like stickers rather than searching for witches, did a lot to reduce my enjoyment of the show. But I would be lying if I said I didn’t enjoy my overall time with Yamada-Kun and the Seven Witches, and there is definitely fun to be had here if you give it a chance.