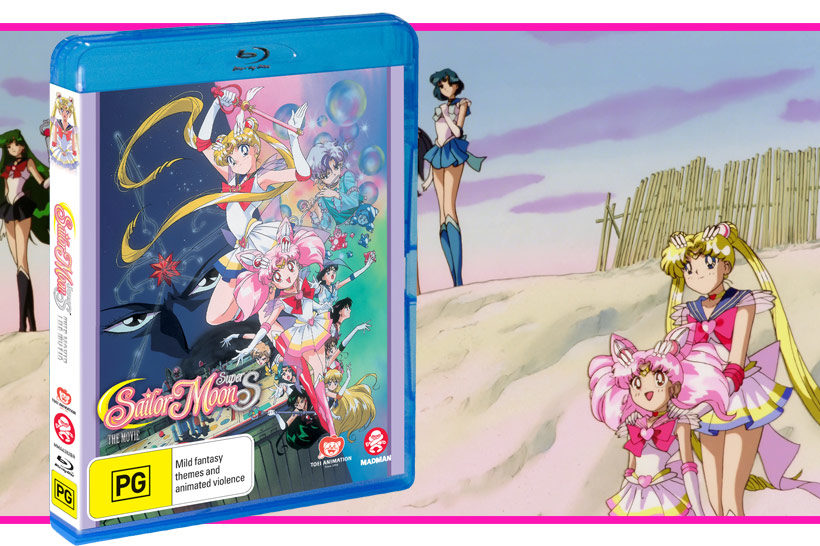 1995’s Sailor Moon SuperS The Movie marks the end of the theatrical run for the 90s adaptation of Sailor Moon. With four seasons and two movies to draw inspiration from, the question is how well the team can build off such voluminous source materials for this release.

Sailor Moon SuperS The Movie is, much like the TV series itself (reviewed here and here), all about Chibi-Usa. Specifically, Chibi-Usa gets a crush on a boy who happens to be a dream fairy who is trying to stop other dream fairies from kidnapping children by singing a song about apple pies and other sweet things. The children, of course, have been targeted so a great evil power can take over earth by harnessing the dream energy of children. Thankfully the Sailor Senshi are onto their nefarious plan and save the day by doing swirly-swirly attacks and harnessing the power of love and friendship. 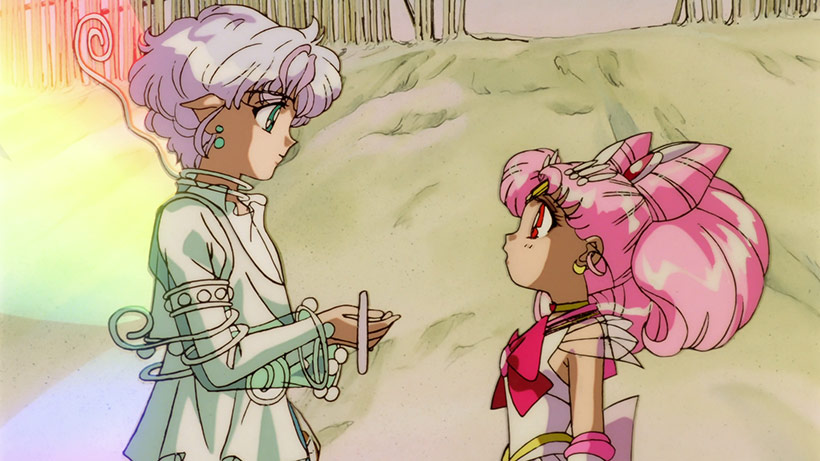 In the grand scheme of things, the first Sailor Moon movie, Sailor Moon R, definitely put a bit of effort into telling a story that tied the original Hell Tree arc back into a broader narrative. Then Sailor Moon S eschewed narrative strength for a sweet story focusing on Luna. The former was definitely the stronger of the two thus far, but there was some genuine heart to the second movie.

Sailor Moon SuperS The Movie though? This is a light-hearted and frivolous entry very much in line with Toei’s Dragon Ball Z, Digimon Adventure (and so forth) movie adaptations of their popular children’s TV series’ at the time, though I think it holds up better than some of the Dragon Ball Z entries because it’s a little more light-hearted and fun. It’s very fluffy, but you know what? So was Sailor Moon SuperS. The nice bonus is the production values are great and the movie really benefits from the extra budget. 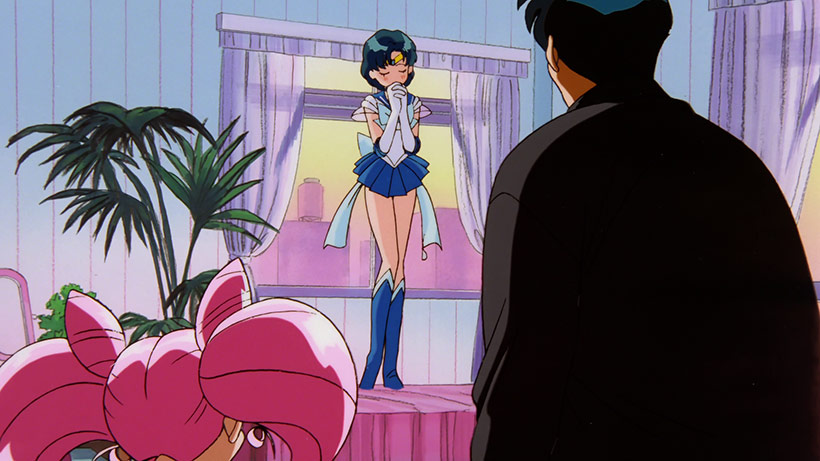 But, if we’re being honest, Sailor Moon SuperS The Movie’s least-enticing feature on this release is not the movie itself. The real star of this release, which also served as the proverbial entree to the SuperS Movie’s theatrical release back in the day, is the animated short Ami’s First Love (or for my fellow weebs – Ami-chan no Hatsukoi). Clocking in at around 16 minutes, this is the perfect distillation of what made 90s Sailor Moon so amazing. Tadano’s character designs are gorgeous with some amazing flourishes that even excel parts of the main SuperS movie.

The story is tight and focused with a beautiful sense of humour that builds on all the charm from the TV series’. The supernatural action sequences are beautifully choreographed and the emphasis on slice of life rather than a random Earth-killing monster mutes the potential for a hyperbolic mess. Plus there’s the lovey-dovey shoujo moments and plenty of time for Aya Hisakawa to take the lead role in a theatrical Sailor Moon release! 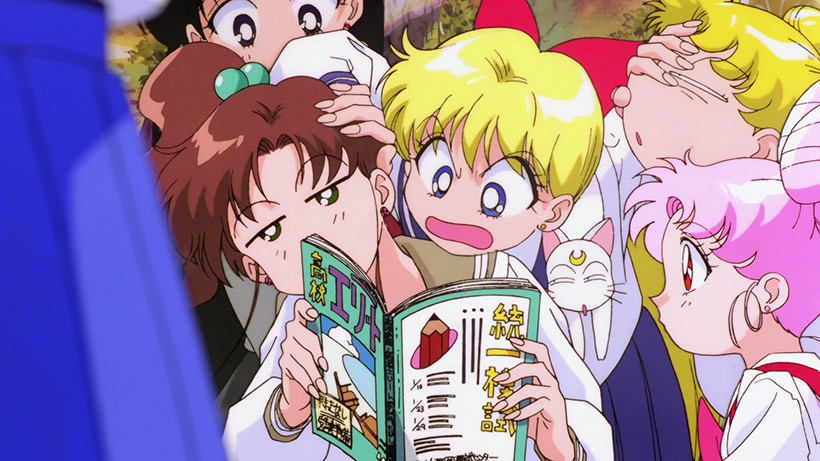 In fact, I might go as far as to posit that Ami’s First Love is actually the perfect distillation and representation of why the 90s adaptation of Sailor Moon is so successful and well-loved. While there are plenty of reasons to fight me on this one (like episodes 45-46, episode 103/most of Sailor Moon S, and so forth), I think there’s a good argument to highlight how amazing this piece of animation is.

In terms of the package for Sailor Moon SuperS The Movie, Ami’s First Love is the only real bonus feature aside from some trailers. But that’s okay, because it’s so amazing. The good news is that the transfer looks great, and those scenes where they’ve had the budget to get all that beautiful clean linework have come out trumps. Similar to the movies for Sailor Moon R and Sailor Moon S, both the main feature and the supplementary short have been transferred off 35mm masters and the jump in terms of native resolution and colour reproduction looks amazing on Blu-Ray.

I’ve watched both of these on VHS, laserdisc and a few DVD revisions, and this is truly awesome to watch in action. While the transfer isn’t reference grade with some spots and nicks alongside a little telecine wobble-like artefacting, the grain is super fine and the detail’s well-retained. Audio is LPCM stereo which is fine, with both the original Japanese track alongside an English dub which is… well, probably serviceable? The voice talent in the Japanese run of Sailor Moon is so strong that I didn’t have much interest in checking it out, but it’s there if that’s your thing. 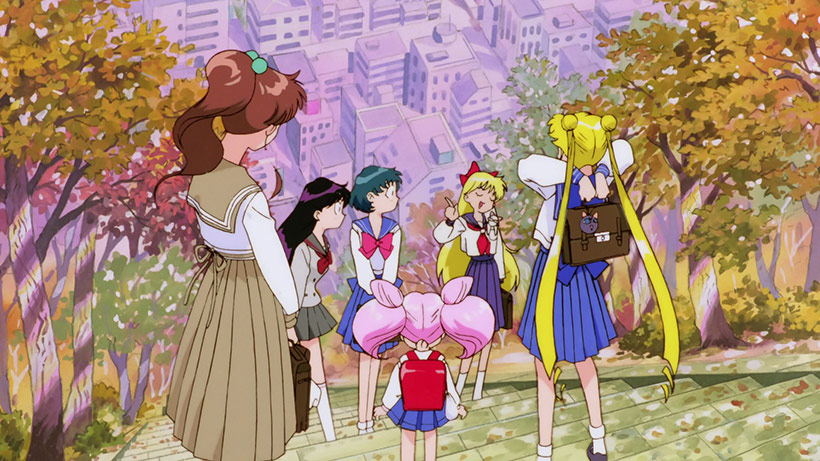 Summing up my thoughts on this release of Sailor Moon SuperS isn’t terribly objective – the movie’s fluffy but serviceable, but the real winner here is the inclusion of a native HD transfer for Ami’s First Love. While the inclusion of the interviews from the Japanese laserdisc releases would have been a great way to round out the package, I couldn’t help but watch the whole Blu-Ray with a stupid fanboy grin on my face. Like the pending release of Sailor Stars, the mind boggles that we’re seeing such loving HD treatment of Sailor Moon hitting Australian shores. Highly recommended!