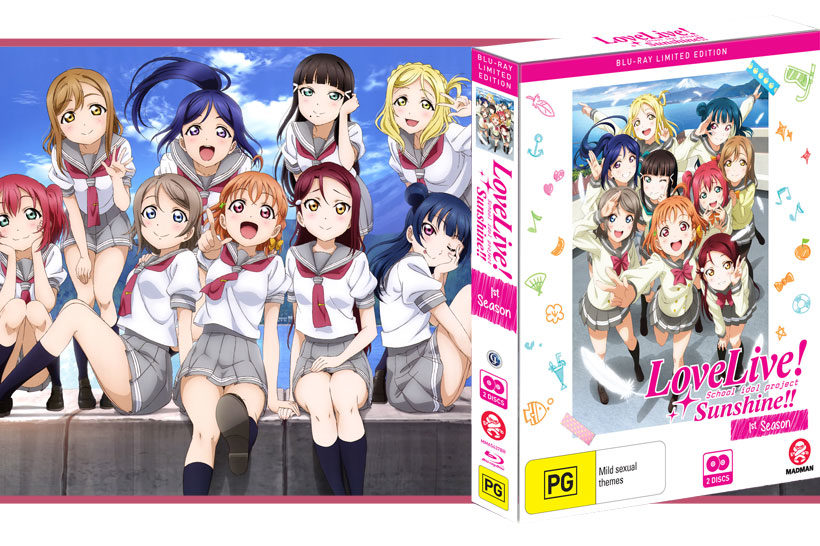 Coming in on the heels of the two original Love Live! series and movie telling the tales of the girls of μ’s, this franchise is a legitimate phenomenon and Love Live! Sunshine!! had a hell of a legacy to live up to. After telling the story of a group Tokyo girls who made Akihabara their stomping ground in order to save their school through music, how do you turn it up and manage to go bigger?

Turns out you don’t. In a smart move, Sunshine takes a step back from the big city and the bustle of Tokyo and tells a substantively similar but significantly smaller story, in a much smaller town at a much smaller school while still managing to pack in personality and charm that’s just as big as the original. Set in the seaside town of Uchiura in the Shikzuoka prefecture, this time its the Uranohoshi Girls’ Academy set to close due to low enrolment numbers. Some years have passed since the events of the original series, and taking a page from School Idol history, the enthusiastic second year student Chika Takami sets out to get a group together, enter the Love Live School Idol competition and raise the profile of her struggling but beloved school. 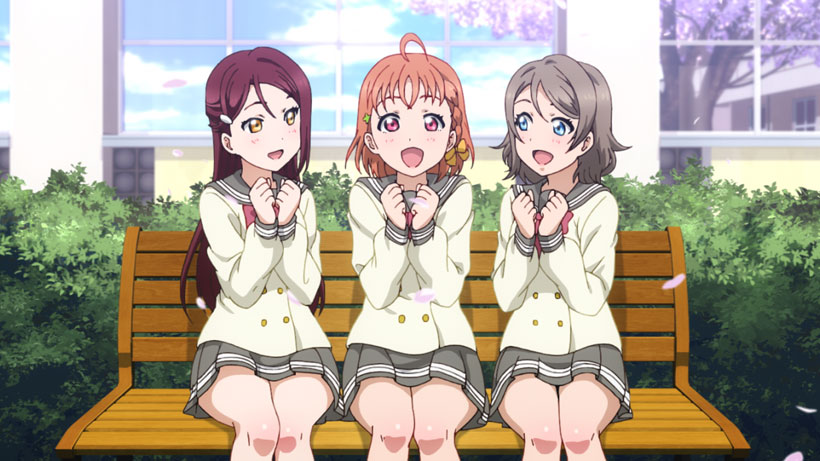 Chika is very much cut from the same cloth as the original series’ Honoka Kosaka, to the point she’s almost a carbon copy in both character and design, but she serves as a fine vessel to move the series forward as the leader of the nine girls that will go on to form the group Aqours from among the student body. Transfer student Riko Sakurauchi, who transferred from Tokyo’s Otonokizaka Academy, the school from the original series, provides a nice link back and as a piano player is quickly recruited into Chika’s scheme along with fellow second year student and uniform-fetishist You Watanabe to mark the start of putting together their nine girl group. 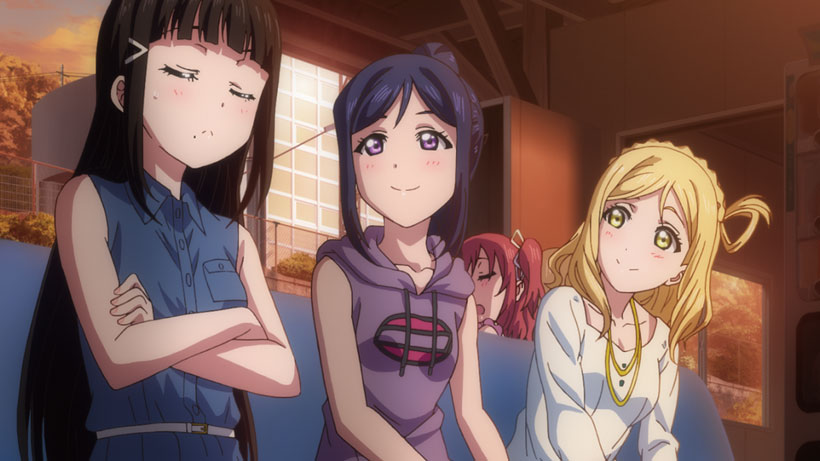 The series hits a lot of the same beats as the original – the fledgling club struggles to recruit members, runs into opposition from the student council leader, the proper and uptight third year student Dia Kurosawa and the chairman of the school Mari Ohara, who is also a third year student, but both eventually come into the group along with fellow third year Kanan Matsuura as the three work through some, admittedly, pretty trite and petty past drama (even by Love Live standards, which is saying something) before committing fully to the group. It provides a lot of backstory and motivation in the long run, but you’re probably going to wish you could yell at the three of them to stop being buttheads and get along again while it’s playing out. 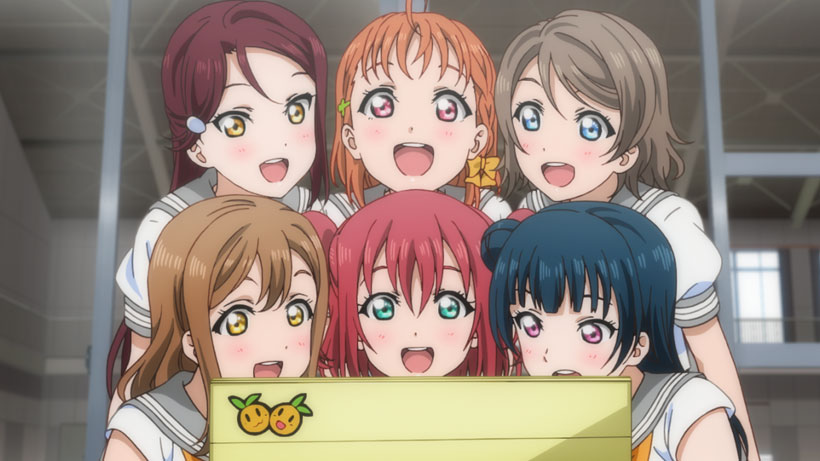 Rounding out the nine are chunibyo stereotype first year Yoshiko ‘Yohane’ Tsushima, who styles herself as a fallen angel with the powers of darkness, bookworm and food-lover Hanamaru Kunikida with the vocal tick of ending her sentences with ‘zura~’ and the quiet, shy Ruby Kurosawa, the sister and polar opposite of Dia. The full group forms a likeable core and as they work to find their identity as a group they go through some silly ideas and gimmicks before taking the name Aqours and entering the Love Live contest. 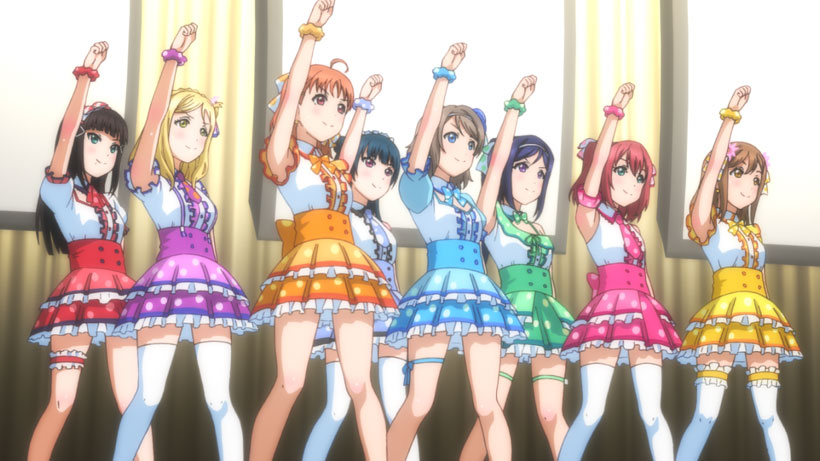 Unfortunately, in the days since μ’s rocked the contest and saved their school the Love Live scene has become vastly more competitive, and Aquors find themselves not only making a competition rival in the sisters of Saint Snow, but also not even coming close to realising the success they were hoping for. That sets out one of the key things that keeps Sunshine feeling fresh and not like a rehash of the original – Aqours are quickly placed as underdogs in their story and face a stacked deck on the way to trying to achieve their goals and hopefully save their school, and any success they might find along the way doesn’t feel like a given, and leads to some twists along the course of the series. 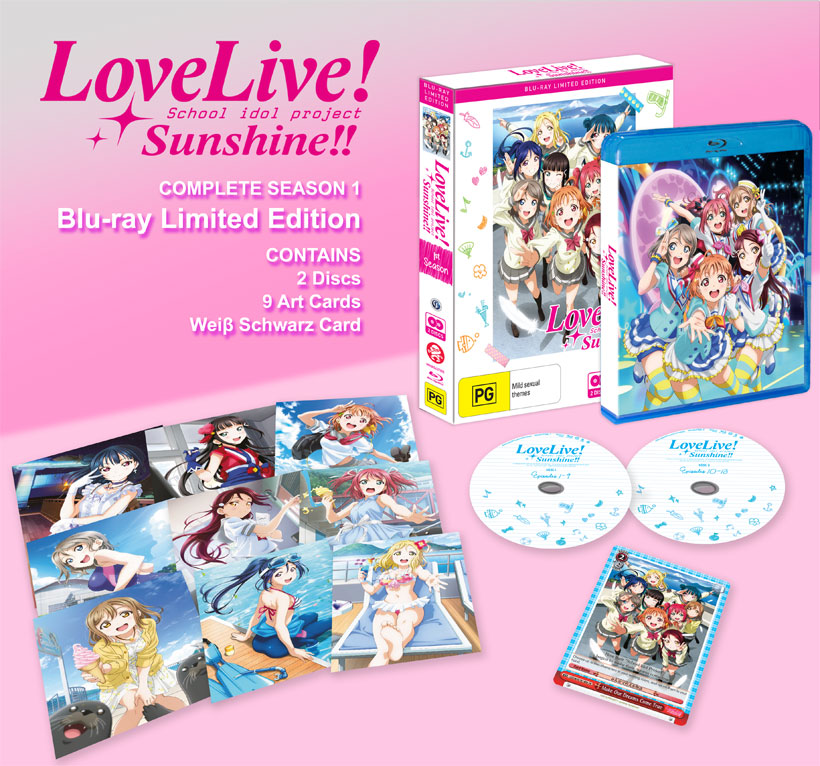 Madman’s presentation of this Limited Edition Blu-Ray set is superb, with nine large glossy postcards, one of each girl, packed into a box along with the two-disc set and a card for the Weiss Schwarz card game. Its a change-up from booklet that came with the original series LE, but I must admit the large postcards are a much nicer pack-in bonus.

If you were a fan of the original Love Live, there’s a lot to like here. If you didn’t care last time, you’re still not going to. Sunshine takes a familiar premise and tells a familiar story, but finds a fresh way to present it through the new cast and a new and unique set of challenges presented to them. It pays plenty of homage to the original series and the legacy of μ’s but doesn’t lean too heavily on it, instead carving out its own identity along the way. 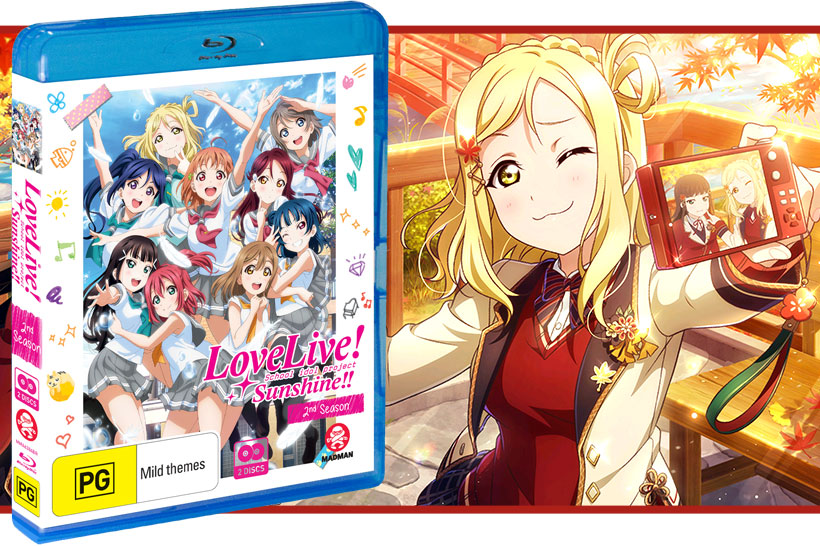