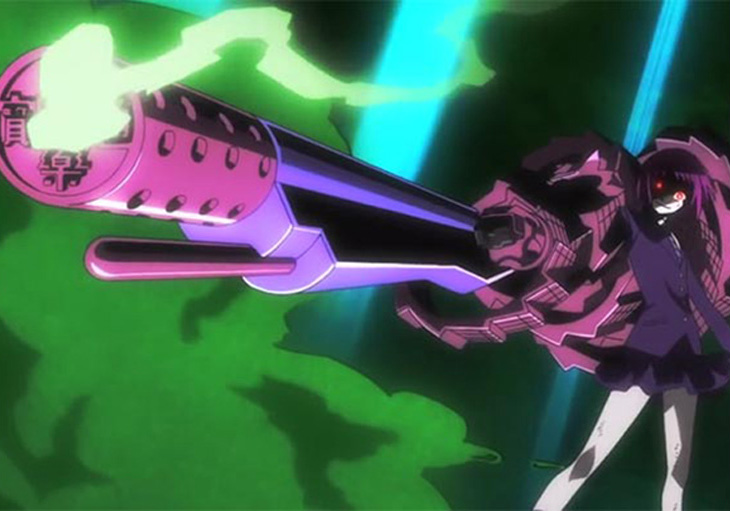 I will admit this straight off, I went into Nobunagun completely in the dark about any of it. And from first impressions, it is pretty much an Alien Fighter Hetalia crossed with a history lesson, covered with drugs.

Momentarily sidestepping the quirky artistic style, the first episode of Nobunagun couldn’t have started off any more generically if it tried. The cliche ‘Crap-I’m-late-for-school-gotta-run-with-a-piece-of-toast’ gag had my eyes roll so far back I could examine my own frontal lobe and prepare myself to settle in for a likely inauspicious series. A misfit girl discovers she has a heritage that no one knew about when monsters attack and a classmate who has been nice to her needs to be rescued, and the heritage allows her to tap into superpowers in time to save the day. Cue the obligatory secret organization whose super-powered members are the only ones able to combat the alien menace because conventional weapons are ineffective. Those akin to anime superhero stories will probably agree that is a well-walked path.

However, when we get the first shots of the empowered Shio Ogura; a petite girl wielding an impossibly large gun on her right arm, sporting an expression of crazed glee with an image of a sharp-featured Oda Nobunaga laughing manically in her red eyes, with a hard rock score playing in the background… I stand corrected, this is by no means generic, and the impact it carried had me sitting bolt upright. 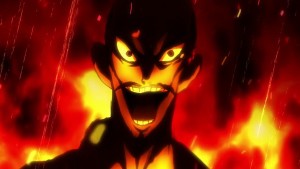 The momentum is kept for the second episode too, steamrolling as an absurdly outstanding action sequence and then shifting gears into a more emotional second half, solidly establishing the relationship between Shio and Asao. It gives a window into the more fragile and overwhelmed teenage girl behind the gun. Despite settling down for the next few episodes, mostly consisting of Shio trying to adapt to working at Dogoo, encountering various other E-gene Holders with peculiar personalities, it is still good. The backstory of a couplekey characters are explored a bit, adapting tactics to the ever evolving threat of the EIO’s, and potential romantic pairings are thrown around, mostly consisting of Sio and Jack. The story picks back up for the ending episodes as Dogoo prepares for and executes its most important mission.

The titular heroine doesn’t follow the trend of female anime leads. Shio is a loner with a passion for military weapons and vehicles, something that drives most of the students around her away. The normal trope would be for her to want to fit in, but Shio seemed perfectly content with her standing. There are a lot of characters to work with in the series, and for the most part, they weren’t as interesting as Shio, either being glossed over or not touched on at all. The romantic tone that exists between Shio and Asao is likely intended to be an undertone all along, and the character dynamic between the two would make a far more satisfying love story than the pairing that Nobunagun eventuates to. However, the chemistry that develops between Jack and Shio, while plain compared to the former pairing, is enjoyable, the two of them acting as foils for each other. 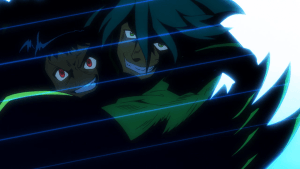 The art style is what makes this such an enjoyable series to watch. It can only be summed up as fun. Battle scenes are bold and overpowering colour schemes tinged red, and despite the ordinary background and character design quality, the outlandish execution of the animation says, “It doesn’t matter if it looks ridiculous, as long as it is fun,” and from that view, it does it well. Fan service, despite the French-kissing scene in episode three and the recurring joke with Shio being photo-shopped by Capra to be falsely depicted as having a larger bust, is kept relatively tame and limited to only two or three episodes. The action scenes are well-choreographed and really built up some hype.

The musical score rivals the visuals with hard rock numbers for the action scenes and electronica themes scattered elsewhere. The opening theme “Respect for the dead man” by Japanese alternative rock/metal band Pay money To my Pain, hits with a metalcore sound that reminded me of Parkway Drive in terms of their gritty English lyrics and set the tone for the series, in my opinion being one of the best openers for an anime. Regular closer “Chiisana Hoshi” is a gentler, J-pop number that by comparison fades to generic nonexistence, visuals for which vary depending on which characters featured in the episode. I honestly skipped it most of the time since the J-pop felt like it didn’t fit with the rest of the music at all.

The English voice-acting wasn’t overly great, likely more hampered by the scripts than anything else, but the English voice actors attempted to base their voices of the historic spirits and gave a far more diverse range of character vocals than otherwise possible. I still maintain, Nobunaga’s maniacal laugh at the end of episode one is gold, suiting that scene perfectly.

All in all, Nobunagun could have easily gone off the rails straight after episode two. It didn’t run with its own ludicrous premise and treated some scenes with undue seriousness, instead of continuing with its lightheartedness. What saved it for me was the striking visuals, strong musical score, solid female lead, and an overall sense of fun. The ending leaves room for continuation and resolution, however, I do recommend it for fans of shounen anime, yuri undertones or action series like Hellsing.